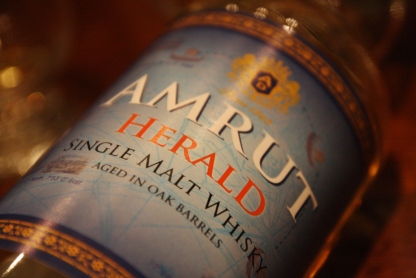 Apologies for what may seem like lazy reviewing here, but I’m gonna sit back with my feet up (and my dram of Herald in hand) while you navigate a paragraph or two from the Amrut website itself.  After that…I’ll step back in and share a little bit of my own personal feelings on this dram.

“This single malt travelled almost close to 5000 miles to touch the finishing line. Unpeated malted barley sourced at the foot of the Himalayas, Initially distilled and matured in the city of Bangalore, India (3000ft above the sea level lie at the heart of the Mysore Plateau with a Geographical coordinate of 12� 59′ 0” North, 77� 35′ 0″East).

After the thirsty Angels of Bangalore have had their sumptuous share and the aged spirit has qualified to be called as whisky, the barrels were moved to an un thinkable location; Helgoland (167 ft above sea level with a average humidity of 82.9%); a small German Archipelago in the North Sea with a Geographical coordinate of 54� 10′ 0″ North, 7� 53′ 0″East). The whisky was matured there for a further period. The sharp contrast in altitude, humidity and temperature have had an impact on the maturing whisky and led it to an extra ordinary finale.”

Cool stuff, that.  This distillery thrives on such innovation.  The really neat part is, though, that while there have been several other very innovative distilleries out there (Bruichladdich, Arran, etc), none have met with the success rate that Amrut has.  Every new release is a treat and has me scurrying like the proverbial rat for the cheese.  Can’t help it.  This whisky is almost aphrodisiacal for me.  (Lucky wife I have, huh?  Now if only she’d believe that!).

Nose:  Typical Amrut spice profile.  Creamy.  Almond.  Swiss milk chocolate.  Raspberry.  Botanicals.  Vanilla.  Spruce tree.  Yellow sugars.  Lime.  Uber smooth and delicate, and like all releases from this distillery…the climate has induced an accellerated maturation that allows this young whisky to swagger with a confidence well beyond the years it can actually boast.