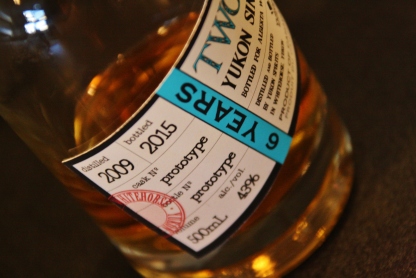 Check these cats out.  What the hell?  Two Brewers is the brainchild of a couple of pals, Bob and Alan, up in Whitehorse who have been batching up craft suds for close to two decades now and decided to take a bit of a swing at the distilling side of things at some point in the late 2000s.

As you can see by the photo this was a prototype release (i.e. nothing official and not available retail).  The gents had bottled and labelled up this young buck specifically for the MS Whisky Fest here in Calgary.  Towards the back half of that festival night I took a flyer on this one and decided to give it a go instead of reaching for one of the old standbys.  Glad I did.  They’re onto something up in the great white north.

Here’s the deal:  This is a young malt.  It’s not quite there yet.  But…it’s a fair bit further along than it should be at six years and it’s a surprisingly great cut of spirit.  The nose here is wonderfully redolent of spicy bourbon notes and hints at more age than the bottle declares (always a good thing).  The palate isn’t quite on par, but again…give ’em time.  A few more years and this will be a solid option for denting your whisky budget.

Thanks to Bob for passing on the wee heel of this one so we could share the word.  Can’t wait to see where these gents go from here.  Keep those stills flowing, fellas!

Palate:  Spicy and meaty delivery.  Tastes a lot younger than it noses.  Slightly waxy and new make-ish.  I don’t think this has anything to do with anything but youth.  In other words: decent spirit cut, but needs time.  A few years down the line and this will be a hell of an interesting whisky.  Reminds a tick of Montana Roughstock single malt.  Big wood notes smash headlong into eucalyptus.  Again…very bourbon-ish.

Thoughts:  It’s young, yeah, and not quite there, but man, what an exciting nose.  Worlds of potential for these chaps if they stick to this plan.  Neat stuff.