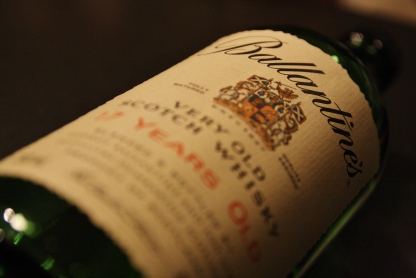 Fuck.  Seriously.  Can’t tell you how disappointed I am that I can’t come in here with both guns blazing – Yosemite Sam style – and raise a hella pile o’ ruckus.  I desperately wanted to lambaste a certain whisky writer who decried this 17 year old blend as ‘world whisky of the year’ a couple years back.

Let me be explicitly clear:  this is certainly no whisky of the year.  Having said that, I’d be less than honest if I didn’t confess outright that this is a really good blend.  I’d almost guess malt over blend, to be honest.  There are some fabulously clean and pristine sweet/candy/fruit notes that suggest components much older than 17 years too.  I’m not certain as to the bottling date for this particular edition I have, but perhaps it pre-dates the ongoing whisky boom by a few years, in coming from a time when there was enough mature whisky available to the blenders that it was in fact possible to find whisky older than the age statement buried in the vatting.

The bottle I have in hand (as seen in photo above) is much older than the edition said writer led us to believe was the intoxicating tears of Dionysus.  If there is in fact a WWOTY-worthy release of the Ballantine’s 17, I hate to say it, but this is not it.  I’d love to get my hands on that particular edition, but I’m sure the shelves were wiped clean within hours of the press release.  You’ll notice though, there aren’t a lot of folks out there waxing rhapsodically about how amazing that B17 was from a couple years back.  Hmmmm.  Interesting.

Finally, I’d like to add that logic (and god knows mine is skewed) tells me that older versions of most any whisky would likely be better for the very reasons listed above, but, of course, with whisky y’never really know.

What it boils down to is that I’ll not go on the offensive here to the degree I initially thought I would, but I am certainly on record doubting the validity of ANY blend earning whisky of the year honors.  Malt snobbery?  Perhaps.  I prefer to call it ‘reality’.

Palate:  Straw and grass.  Anise, ginger and cinnamon.  Reminds a little of a stunning 2007 Jameson Rarest Vintage I tried.  Not quite as exceptional, but some very similar notes.  Also reminds a tick of Ardbeg’s Serendipity from a few years back.

I have a bit left of this one.  Would love to share and solicit some other opinions.  Anyone?