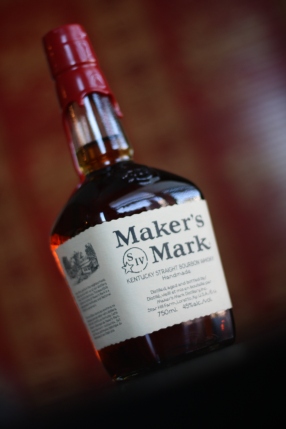 Bourbon is a different beast entirely. For those that read my jottings and ramblings, you will no doubt notice that bourbon is far from my mainstay. I appreciate it. I drink it. I occasionally even crave it (is that the sign of a problem?). Nine times out of ten however, I’m probably going to reach for that scotch bottle instead.

Perhaps this is driven by an appreciation for what age can do to whisky (what with most bourbon being younger than most scotch), or perhaps it is simply a bias to pure grains over corn and rye in my glass. Who knows.

Irrespective…it is hard for one, no matter personal bias, to not respect what Maker’s have crafted.

On to the drink at hand: Maker’s Mark. Standard red seal. Age: Anywhere from 6 to 7 ½ years. This age variation will depend upon how climate has stunted or accelerated growth in the warm Southern state of Kentucky. Casks are rotated in the warehouses, periodically checked and bottled according to ‘ripeness’. We, the lucky shopper shelling out our dollars, are then presented with a bourbon in all its youthful charming glory. Bold and fruity. Sweet and spicy.

The nose is dominated by honeyed fruit, corn and oak. Rich cherry spice and creamy dessert notes are carried with a hint of toffee and vanilla. Mild cacao and wax (think Cherry lip balm) as well. Just a hint, fleeting, of something sharp and green.

The palate is defined by lively oak carrying vanilla and spices. A hint of mint and honeyed grains and cherry round it out, while the finish is corn/grain and oaked cherry.

Maker’s is charming as hell. A Southern Belle that is at once unique and comfortably rooted in the tradition of bourbon. Love the big fruit. Love the integration of spice and wood and how the vanilla tempers everything so beautifully. Deserves a spot in any whisky cabinet, methinks. 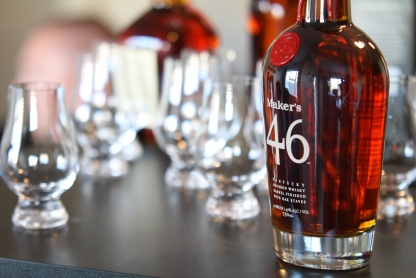 The standard Maker’s Mark charmed the pants off me. That is saying something, as for the most part, I am not the biggest fan of bourbon. I likes it just fine, but am led far more often to Scottish fare. Something about this Kentucky staple struck just the right chord in my heart however. Having said that…you can imagine how the announcement of Maker’s 46 had me chomping at the bit in anticipation.

Taking a page from the playbook of John Glaser, the folks at Maker’s decided a little fresh wood added at the right stage of maturation would be just the ticket to open the floodgates of innovative enlightenment. Bourbon regulation, though tightly controlled, is obviously not quite as bound by the fiercely conservative traditions that govern Scotch production, as I have heard nothing about MM having the fights that Glaser did when he released the Spice Tree. All the better for those of us salivating in anticipation.

After the standard period of maturation (6-7 ½ years for MM) 10 seared wooden staves of French oak are inserted into barrels of Maker’s and the spirit is re-racked to allow the new wood and spirit to get to know one another for a few months. These oak staves are there to add a caramelized sugar depth.

Though this was obviously a labor of trial and error (the ‘46’ refers to the batch experiment that was finally deemed a success), the efforts paid dividends.

The nose now is much mellowed and less fruit heavy than the standard Maker’s. And yes…those rich caramel flavors do rest heavily atop the sweet spicy nose that normally characterizes this bourbon. Slightly waxy and heavy on the vanillins, this one sorta surprises with a healthy dollop of maple. Fruity, but less cherry than I can normally pick up from this distillery. Dusty corn, of course, the hallmark of bourbon and mild nutmeg fill in the gaps.

Spiced corn and youthful fruit are the first to cling to a taste bud on tasting. The 46 fades into a throbbing popcorn and fruit-tinged finish, but the oak holds on a little too long.

Quite a snazzy little variant on the Maker’s Mark standard. Better? Not certain. Perhaps a touch. More mature and mellow anyway. Even a few more months in wood in the Kentucky clime allows for a more mature spirit.

The Charm of a Southern Belle

Deep in the heart of Kentucky, on the banks of Hardin’s Creek, there rests a tiny little burg called Loretto.  Aside from downhome charm and quaint Southern beauty, this Marion County ‘city’ offers the world something equally full of heart and character.

That something is Maker’s Mark bourbon.

At once steeped in tradition and forging new paths, the Maker’s distillery is a veritable treasure in the American whiskey scene.  The distillery has been producing in its current incarnation since 1954, though under other guises production on site began as early as 1805.

The bourbon we know today is one of premium prestige and affordable approachability.

Maker’s characteristic sweetness, heft (45%) and spice have made it a household name globally, while the bourbon’s unique mashbill (70% corn, 16% red winter wheat and 14% malted barley) allows us a drink that sparkles like a gem in the formidable gold setting that comprises the Kentucky Bourbon Trail.

The classy addition of the red wax dipped neck makes this a bourbon sans compare.

One final personal bias I have to add…any bourbon known as a ‘whisky’ and not a ‘whiskey’, for some inexplicable reason, also scores an extra point or two from this guy.

Verdict:  A little aggressive.  Not in terms of alcoholic bite or anything, but in a somewhat cloying foot odor that is hard to get around.  The spice, vanilla and fruit that so characterizes Maker’s Mark is obviously not here yet due to the lack of wood influence.  There is something almost plastic-like in this ‘just off the still’ juice.  Not for the faint-hearted.

Verdict:  Biggest fruity notes of all.  Deep and mysterious.  Charming as hell.  The fruit marries oh so well with the spice and wood and the vanilla tempers everything beautifully.  A must have in any whisky cabinet, methinks. 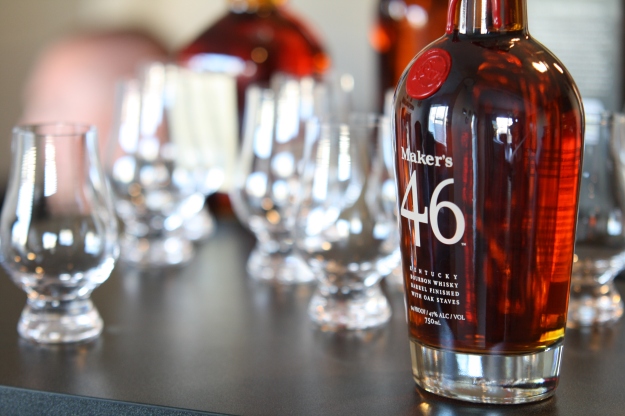 Details:  Starts off as standard mature Maker’s Mark aged 6 to 7 ½ years.  Seared oak staves are inserted into the cask to add a caramelized sugar depth before the cask is resealed to mature for a few months longer.  The ‘46’ refers to the batch experiment that finally ‘made the cut’ so to speak.

Nose:  Wax (lypsyl).  More caramel and vanilla than standard Maker’s, and a touch less fruit.  Healthy hint of maple.  Fruity, but less cherry than I would expect from this distillery.  Dusty corn.  Vanilla and a mild nutmeg.

Palate:  Spiced corn and youthful fruit.  Fades into throbbing popcorn and fruit-tinged finish.  Oak holds on a little too.

Verdict:  Beautiful variant on the Maker’s Mark standard.  Better?  In terms of composition…perhaps a touch.  In terms of enjoyment…hmmm…tough call.  More mature and mellow anyway.  Even a few more months in wood in the Kentucky clime allows for a more mature spirit.