Finally enjoyed the ‘breakfast’ part of B&B.  Due to how much of my schedule here revolves around being up and out early, I couldn’t in good conscience ask my hosts to prepare so early a breakfast.  Today, with no agenda, I was able to sample the breakie fare.

Woke up at Meadowside (Kate McAffer’s place) and was able to shower leisurely and get ready for the day before Kate’s friend came by to prepare breakfast.  Kate herself was just off to Turkey (hope you enjoyed it, Kate!).  I was doing a final pack as the smell of breakfast began to make my stomach rumble.

Holy hell.  Cereal, three slices of toast, thick bacon, sausage, eggs, fried tomato, blood pudding, some biscuit deal, coffee and juice.  I couldn’t eat half of it.  I felt extremely rude leaving so much, but man…I wouldn’t have been able to walk.  I felt a little better after being told that this was not a typical daily breakfast.

After finishing my coffee I wandered Bowmore a little more, picking up a bottle of the Caol Ila Natural Cask Strength (The same dram I sipped a couple days back in Duffies and fell in love with…sadly unavailable in Canada) and said a melancholy farewell to the sea.  By now Bowmore was feeling quite comfortable.

On my stroll down the cobbled walks I passed a fellow stepping out of a doorway.  Absolutely…hopelessly…leglessly drunk.  Now, as mentioned ad nauseum, the people on Islay were unbelievably friendly.  This bloke was no exception.  As he stumbled toward me, he slurred a ‘good morning’ or some such thing.  I nodded and smiled in return.  A few steps further along he bellowed back at me.  I turned round and proceeded to get in shit for not saying hi.  Obviously in one of his sloe blinks he’d missed my nodding acknowledgement.  After a quick chat we were best of buds with his arm ‘round me.  Hahaha!  I love it here.

As I waited for the bus to the airport, it became evident no bus was coming.  A group of ladies sat around smoking cigarettes and musing aloud as to why there was no bus.  About 15 minutes later a Royal Mail Post van showed up and the ladies hopped aboard the empty seats ( I guess this is typical).  Of course I left the ride to them as there was not enough room.  An older couple parked a couple spots away from the bus stop began gesturing in my direction.  At first I ignored it, thinking it must be someone else they were flagging.  After a few moments I realized it was me they were motioning to.  The gent in the driver’s seat said that they had seen me waiting with bags in hand before standing back so the ladies could ride.  In turn they decided to offer me a lift.  Can you think of a better send off from the folks of Islay than a gesture like this as I head to the airport to leave?  Unreal.  In a beautiful bit of Scottish detail the gent’s name just happened to be Shamus.  I didn’t catch his wife’s name, or that of the faithful hound (sorry, folks!), but I can tell you they were wonderful people.  Thanks again, fols…you saved me either a helluva walk or a helluvawait.

Bah…who am I kidding?  After this week my feet are too sore to walk that far.

Anyway…they graciously dropped me at the Islay airport in Glenegedale, where I sit jotting this.  At 6:25 pm I am off to Glasgow again where Mark Connelly (of whiskywhiskywhisky, etc) will be nabbing me from my hotel (right at the airport) for an evening sitting in with the Glasgow Whisky Club.

After this little outing?  Well…back to the hotel…a bit of sleep…and up for my 11:55 am flight home.  At this point my own bed with my wife’s arms ‘round me sounds like the best thing I’ve ever heard.  Can’t wait to see my girls.

Cars park on either side of the road here in either direction…deciding I had to bring back a rum from Islay (nope…not Renegade) to surprise the gang back home (more details to follow…can’t spoil the secret yet)…nifty trying blood pudding, but certainly no hurry to do so again…sadly no haggis…

An Evening With The Glasgow Whisky Club

On my way back from Islay I was fortunate enough to have an evening free in Glasgow.  I had contacted Mark Connelly (www.whiskywhiskywhisky.com) ahead of time about possibly meeting up for a bevvie (or two).  Mark was all for it, and offered to swing by my hotel at the airport to pick me up.  A brief jaunt brought us to the Bon Accord pub in downtown Glasgow.  The place was hopping for a Tuesday night, surprising even Mark, who mentioned that Tuesdays were generally a quiet night at the Bon Accord. 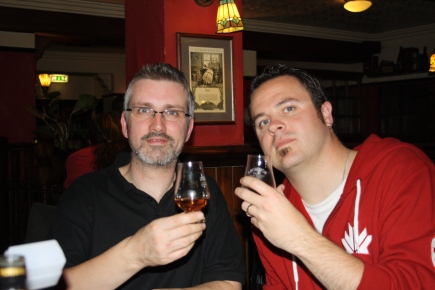 Mark Connelly and I

My arrival in Glasgow, and hookup with Mark, just happened to fall on club night for the Glasgow Whisky Club (http://glasgowswhiskyclub.blogspot.com/).  Mark invited me to sit in with them for the evening.  Within minutes of arriving and shaking a few hands, I was perched at a table with a pint and four Glencairn glasses of whisky (!!!) in front of me.

It was ‘game on’ from there.  Pints were delivered in regular intervals and the whisky bottles were passed around like cousins at a barn dance.  An absolute gem I was fortunate enough to try was a Clan Denny Girvan grain whisky at an astonishing 45 years old.  Simply brilliant.  Smooth and sweet like an aged rye.  I was bowled over by this one.

I remember a Douglas Laing Caperdonich (1982, I believe?)…a 1997 Provenance Benrinnes…a gorgeous Laphroaig shared from a sample bottle…and…well…don’t remember much beyond that to be honest. 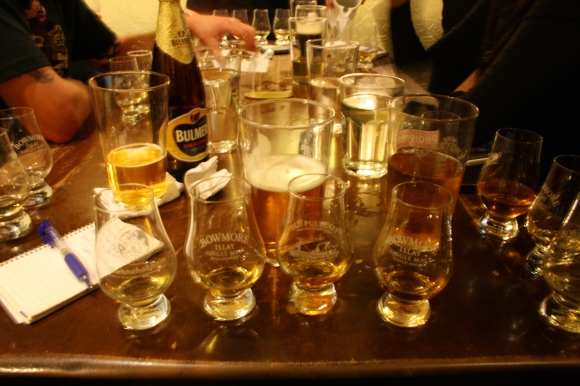 Just a few that were sampled

The club boats a whopping 64 members, though meetings tend to have about half of that in attendance at any given time.  A truly dedicated bunch though, many in GWC shirts (“A Dram, Not A Drama” on the back), all with a nose in the glass.

I wish I could keep track of all the names that were thrown at me, but by the end of the night I was well-nigh legless.  A lot of insight was shared into product availability, the state of whisky in Glasgow, the format and endeavours of the club, plans and undertakings of certain ambitious members and much more.

Bill…Matthew…Mark…thoroughly enjoyed our chats.  At the risk of offending anyone by not remembering names, I’d rather say that I enjoyed hanging out with the couple sitting with me (who shared that Caperdonich)…the jovial chap who took the piss outta me all night about being Canadian (and arguably knew more about Canada than many of us here)…the gent I chatted with about tattoos…and all others at my table.  Cheers and thanks for having me.

Apparently I spoke to my wife back home twice that night after our evening out.  Ahem…a little slurred and overly-affectionate, as I am still being ribbed for.  Oh well.  Gotta confess, as well…I was a little worse for wear the next morning.