Sort of a dreary day on Islay today.  Woke up to sunshine on the Port Charlotte side, but a gray ceiling was forming over the Bowmore side of the loch.  It wasn’t long till everything was overcast.  Twenty minutes or so on the bus brought me back to Bowmore with luggage in tow.  Pulled these now almost unbearably heavy bags up to Meadowside (Kate McAffer’s B&B) and left ’em behind with grateful, though aching ,  arms.  Funny how tossing a couple full bottles of whisky and some gifts and edibles for the family back home has doubled my luggage.  Hmmmm.

Wandered through Bowmore for a bit while I waited for the 10:30 tour at the Bowmore Distillery.  Even on a Monday, not much open before 9:30 am or so.  Still hunting for a couple more things to take back to the wife and kids. 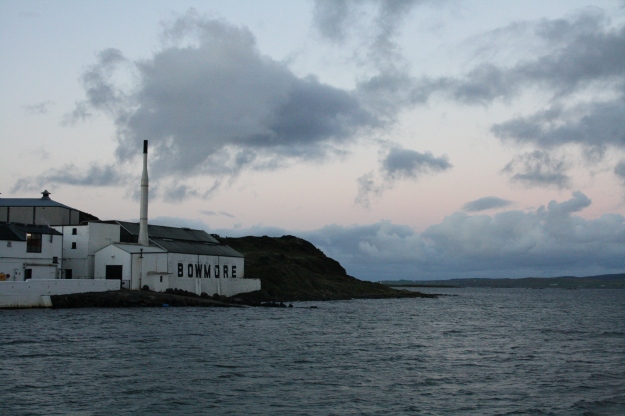 As 10:30 approached I headed back to the distillery.  Not far, of course, as nothing is ever far in tiny Bowmore.  Once inside the shop and recpetion area, I mentioned who I was (as they have a register with names of those signed up for tours) and said I needed to pay, but again…they wouldn’t let me.  This happened several times while touring the distilleries.  Hmmmm…  Wandered the shop for a few minutes while our group assembled, then we all headed out.

Bowmore, as a malt is arguably my least favorite of the Islay whiskies.  It’s not that it’s bad.  It’s not.  Definitely not.  There is just something about the profile that doesn’t quite agree with me.  The Bowmore tour however was asolutely first class.  An enjoyable and unique experience seeing how a whisky of Bowmore’s reputation has been produced throughout the ages.  Our (rather large) tour group was shown around the distillery for an hour or so by a wonderful lady by the name of Heather.  She was informative, friendly and extremely patient, often waiting behind for the lingering shutterbugs in our group (yep…guilty) and even asking if we got the shots we wanted.

From the maltings (again…one of only three distilleries to do their own floor maltings on the island) through the open kiln and on to the old warehouse with the empty Queen’s cask…this was a great tour.  Not to mention… Standing in a room full of whirling peat smoke over a bed of drying barley should be on any peathead’s bucketlist. 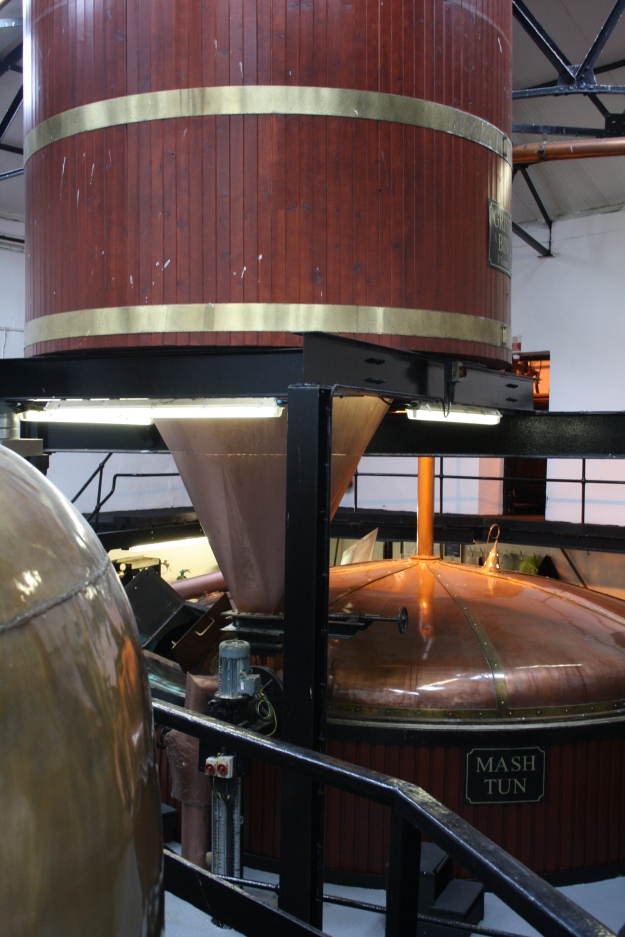 We convened for a malt in the Bowmore Lounge after the tour.  There is a great view over the loch, and it was nice to mill about with the folks from the tour group while enjoying a dram and wandering the little museum of Bowmore history.  Nothing too unique to sample here, but a dram of the 12 year seemed just right for the occasion, as it is arguably my favorite of the handful of Bowmores I have tried to date. 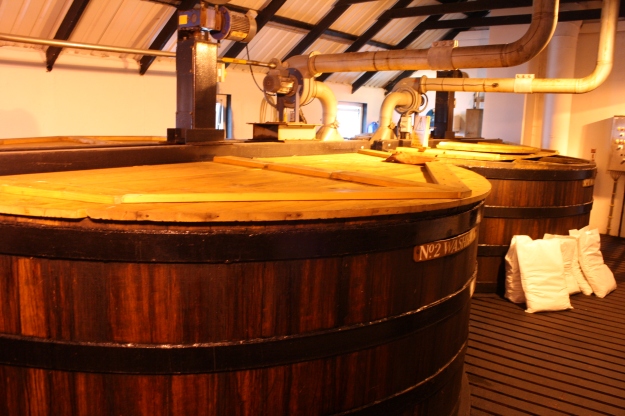 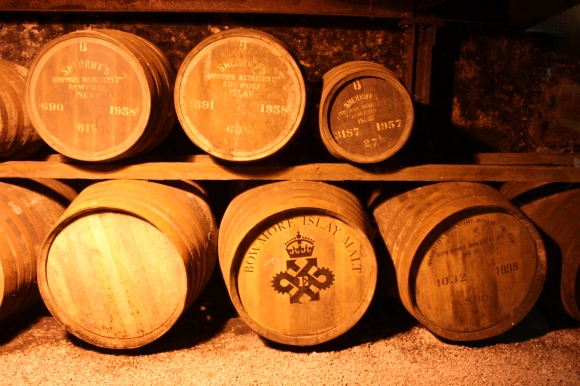 The Casks in the Old Warehouse

Glass empty, I made my way back to Meadowside.  En route I picked up the last few gifts to take back with me.  Hope everyone is happy with what I’ve picked up for them.  When I got back to the B&B I threw my stuff on the floor and myself on the bed.  Think I may have dozed in and out for 15 minutes or so.

Sitting in Duffies in the middle of the day and chatting with the barman.  Great guy.  Good stories.  Easy-going.  I was mentioning my poor luck seeing any ocean critters while sipping a pint and he mentioned a thought…

A walk along the footpath behind the Bowmore distillery leads to a place called the Battery.  This was a stronghold during the war from which the loch was protected.  Following this path beyond the battery takes you down to the shore.  It was here that I finally saw some of the Islay sea life I’ve been hearing about.  I played peek-a-boo with a couple of seals for the better part of an hour.  They were about a hundred yards out or so, and kept popping their heads out of the water.  As I retreated back along the beach toward the Battery they followed along.  Almost like playful pups.  Neat really.

Took some pictures and video here to show the kids when I get back.  By the time I left the bench up on the bluff the sun was setting.  I listened to a few songs from the Wicker Man soundtrack and Agalloch, then went down to the ocean from to watch the waves.  After a few minutes there, I grabbed a quick bite and went back to the room to relax for a bit.

Got up and went for a walk down to the harbour again, slowly making my way down the shore for a bit.  Kinda feels like saying goodbye now.  Oddly enough, while walking the beach I came across an old rusted out swastika amid the seashells and rocks.  What the…?  Looked very old and worn.  Not something I expected, nor did I think it should be around.  I heaved it out into the water as far as I could.  Curious.