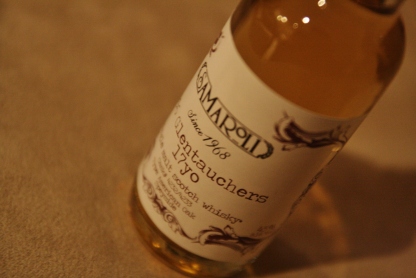 Alright.  Looks like each of the Advent’s contributing indies gets a shot at knocking out a Glentauchers for us.   We started with Wemyss on Day 13…hit A.D. Rattray a few days later on Day 17…and now here we are on Day 20 letting Samaroli have their day in the sun (snow?).  As a whisky geek, I love this opportunity to try a rather rare distillery in three different incarnations.  As a casual whisky drinker, I’d probably hope for a little more variety.

But the simple reality is that this is another exceptional version.  All three of these malts have been ~90 pointers (in my ‘umble opinion), and great examples of good clean casking at great stages of maturity.  So, let’s spin this another way.  Irrespective of how many ‘Tauchers we’ve tried here, if they’re all this good, I’d happily have a calendar chock full of ’em.  Good whisky is good whisky.

This 17 year old is a marriage of two consecutive single casks.  45% is respectable, but I shudder to think what could have been at cask strength.

Nose:  Dusty and old book-ish.  Maybe a touch of cherry in soft dough.  Some mandarin orange as it finally begins to open up.  A mix of marmalade and berry jams.  Soft cinnamon and sugar cookies.  Like opening an old wardrobe or chest.

Thoughts:  Takes a long time to open up.  Sooooo absolutely worth the effort though. One of the best of the calendar so far.  brilliant balance betwwen nose and palate.  Spectacular whisky, all told.

Told ya we weren’t done with Glentauchers, didn’t I?

We had a malt from this distillery on day 13 of our advent journey.  That one was a knockout, so let’s dig in and see what we can suss out about why this one was chosen to represent Day 17.

Much more than just a variation on a theme here, this one is an entirely different beast.  Here we have a different independent bottler; sherry maturation instead of bourbon; cask strength as opposed to 46%; and a couple years younger than the first we tried.  That previous Wemyss Malts Glentauchers blew me away with a certain something (a quirky flavour nuance) I personally hunt for in whisky and rarely find.  This one, while it doesn’t have quite the same personal lure for me, is still another great dram.  Only a point or two behind the other, in my estimation.

What Secret Spirits have ultimately achieved here (by design, I’d argue) is a solid point of comparison between two whiskies produced in the same manner at the same distillery, but handled entirely differently from one another.  There’s a good moral in there somewhere about assumptions and not making blanket judgements (if you’re of the preachy sort).

I should also note that A.D. Rattray was the ideal bottler for this cask.  They tend to leave ’em big and bold, and allow the true character of the whisky to shine through.  What we end up with is a massive malt; oily and lingering, even though the spirit itself is quite soft and lovely.  Think of it this way:  Even Simon and Garfunkel can blow your speakers if you crank it up to ’11’.

Thoughts:  The nose just gets better and better the longer it opens.  Great fruity notes on both nose and palate.  Love this whisky.

Earlier this year I got to try my first Glentauchers.  I scribbled up a few notes on how impressed I was with this rarely seen Speyside malt, while simultaneously lamenting the fact that nearly the entire output of the distillery was destined for the relative obscurity of Ballantines and Teachers blends.  It seems my fortunes related to this malt have changed a little, and…not to give too much away…will continue to do so in the very near future.  😉  I’ll share the word on a couple more ‘Tauchers soon.  Stay tuned.

This 20 year old independently bottled version from Wemyss Malts is just as much of a treat as the ’94 Gordon & MacPhail I refer to above.  Its profile stands in stark contrast to that one, but the inherent quality is unequivocally on par.  There’s a brilliant note herein that I so rarely find, but search for endlessly in my whiskies.  Something along the lines of kerosene or some similar nuance.  Even that is not quite right, but its where I find my thoughts pulling toward.  And the licorice hinted at in the name of this one?  Meh.  Maybe.  Certainly not overpowering.  Ghostly, if there at all.

I may have to start hunting down some Glentauchers for the collection if I keep finding them to be of this calibre.

Nose:  A slight kerosene and wax edge to it (a profile I ADORE and rarely find…must have something to do with the cask treatment).  A whiff of smoke, it would seem.  Candied ginger.  Mint.  Not sure about the licorice thing.  If anything, maybe red licorice.

Thoughts:  This is a very, very singular whisky.  I love this style.  Just wish it was something a little easier to find.

Incredible that a distillery which produces nearly three and a half million litres of spirit a year (and has a capacity even higher than that!) can still languish in relative obscurity.

If the name Glentauchers is unfamiliar to you, don’t sweat it.  It’s unfamiliar to most of us whisky nerds and keeners too.  These bottlings are few and far between.  As rare as hens teeth, in the words of my dear old grampa.  The vast majority of Glentauchers’s output has ended up in blend oblivion, buried in the mass vattings of Teachers and Ballantine’s, according to all I’ve read.  There are, of course, bound to be single malt ‘casualties’ along the way that are used to produce blends, and I don’t begrudge that.  Every now and again, though, I find a bottle like this one that almost makes me wince, wondering how many stellar casks have been relegated to obscurity in the search for consumer-driven widespread palatability.  Sigh.

This Glentauchers is one of the rare Gordon & MacPhail semi-official releases.  Roughly translated as an independent bottling, in reality.  Typical mixed blessings here.  On the one hand, we thank G&M for the depth of their warehouses and the treats they occasionally bottle for us.  On the other, we ‘tsk tsk’ at the neutered bottling strength.  This is another release that would have been well served by being decanted closer to barrel strength.

And for those curious…Glentauchers is a Speyside distillery.

Nose:  Lemon (and a little orange).  Soft creamy custard.  Cantaloupe and vanilla ice cream.  Clean oak.  Slightly biscuity.  Florals and perfume.  A hint of tropicalia, but more like tropical Mike & Ike’s or something, instead of real fruit.  Fresh wax.  Honey.  A very tangy and ‘alive’ nose.

Thoughts:  Really, really great nose.  Uber clean and vibrant.  This seems like what the Auchentoshan Valinch could be if was allowed to grow up.