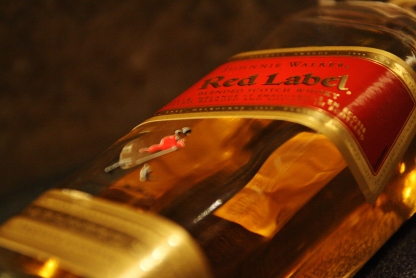 A blend can absolutely sparkle.  Think about it.  A good master blender is able to create his whisky much as a jeweller creates a ring.  He is able, as his whim dictates, to position a selection of malts in a setting of soft or hard grains to create something truly magnificent.  The sky is the limit really.  Components are hand-picked from a multitude of distilleries and married in an attempt to bring to life the blender’s vision.

A case in point, Johnnie Walker Red Label is a blend comprised of about 35 malts and grains.  Generally in a blend such as this the grains are used to prop up the malts, where most of the character comes from.  Logically one would assume that, like diamonds in the center of the setting, the primary malts would stand out in beautiful relief.  So, do the malts sparkle here?

Unfiortunately…not even a little.  This whisky is drab, lifeless and uninspired.  I hate to say it, but JW Red is the reason that blended whiskies get a bad name.  Unfair, really, as there are some exceptional blends out there.  Some of which are even in the Johnnie Walker line.

Surprisingly, the nose on the Red Label is actually agressive at first.  It smells young and raw.  I would strongly advise letting it rest for 15 minutes or so before touching it, and can guarantee you’ll be smelling an entirely different whisky at this point.  The nose is chalk full of cereal notes and harsh grains.  There is a pungent peatiness which I truly did not expect in here.  It really doesn’t seem to fit.  A few other notes dance among the grains.  Notably, a burnt toffee or caramel and some rather tart fruits.

First sips reveal really brittle grains and cloying peat.  There is a certain vegetal weediness tied to these earthy notes, which is only slightly softened by a bit of vanilla.  It tastes a little better than the nose would lead you to believe, but by no means is it a stand alone drink.  As a mixer…perhaps.  I don’t really drink mixed whisky drinks though, so I really have no need for this in my cabinet.

The finish, though short enough is still too long for my liking here.  The lingering flavors just aren’t pleasant enough to not wear out their welcome.

An absolutely unexceptional blend.  Put the $30 you were thinking of spending on this towards a bottle of The Black Label instead.

One final note on blended whiskies…

They rely on the availability of their components for consistency.  I will revisit this whisky in the future to see if I notice any of the changes a few other souls have mentioned both verbally and in print.