One of those reviews I parked a while back. Time to let ‘er fly…

We have Sukhinder Singh, the fine gent behind The Whisky Exchange, to thank for this nifty little range of malts. The Elements of Islay series is a bit goofy and irreverent on the surface, but make no mistake, these are serious drams where it counts. And where it counts is in the glass, of course. But hey, what can I say…I prefer a little austerity in packaging over quirky attempts to stand out from the herd. Maybe that’s just me. Either way, Sukhinder is probably one of the most knowledgeable and devoted whisky folks out there, so why would we expect anything less from him than expressions offered up small batch, cask strength, non-chill-filtered and uncolored? Easy answer: We wouldn’t.

In the Elements range, each brand has its own code that roughly translates to the distillery it represents. Bw=Bowmore, Ar=Ardbeg, Lp=Laphroaig, etc. And each distillery code is appended with a number that signifies the particular batch. Not too far off what the SMWS has been doing for a few decades now, when you think about it.

So, yes…this one is a Bowmore. A monster of a Bowmore, at that. Kinda Jekyll and Hyde-like, in a way. It’s massive, tingly and uber-rich in deep jammy sherry notes, macerated fruit, old potpourri, but it also comes bearing a nasty symbiotic co-host: sulphur. Sigh. Yup. And not only sulphur but also a slightly moist cardboardy note that hints at TCA (cork taint). In a somewhat paradoxical way of explaining, this malt is both lively and bright…and dead and muted. Tough to reconcile. And, if I’m being totally honest, I really don’t understand how whiskies like this get bottled. This kind of sulphur is a flaw. Period.

It has only been over the last couple years that these Elements expressions have made their way into Canada, hence my being a little late to the party on the review front (not to mention I sat on this review for the last year or so). And though I can’t be too kind to this particular release, I should note here that all of the other expressions that I’ve tried from Elements have definitely been worth having a run at.  Having said that, I’ll go on record as saying Bw7 is maybe one to avoid blowing your dough on.  ‘Less you like the smell of struck matches, that is.

Nose: Blech. Sulphur. Sulphur and what almost seems like cork taint. Putty. Muted jam. Slightly weedy. Kinda like a Laimrig gone wrong. Old marzipan. Some floral tones too. In spite of these…less that flattering notes, this one is actually not awful, but it’s also not a great malt. With time it softens a bit, but doesn’t ever really get better.

Palate: Better than the nose lets on, but barely. Arrives okay, then immediately becomes flat. Dull almond notes. Cardboard or damp paper. Some salt licorice.  Brine. Rubber. Smoke, of course. Pulled pork with a very generic sauce. Some more fruit, but it’s all muddy and muffled.

Finish: Better than expected. Long and rather fruity. The matchsticks, fortunately, are largely forgotten.

Thoughts: A lot of wasted potential here. I know these are small batch vattings, but it seems like a bad butt ended up in here. Should have been left out. 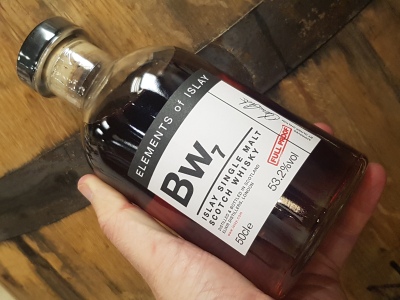