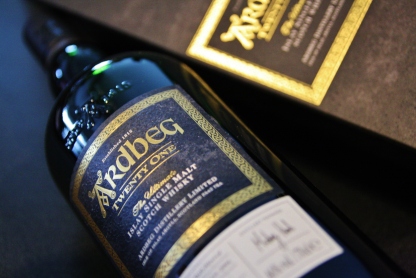 We weren’t in the distillery doors 5 minutes before Ardbeg’s most amazing asset (yes, even moreso than the whiskies), the one and only Jackie Thomson, had poured our little crew of gents a round of the new Ardbeg Twenty One.  Generosity, of course, but also a telling amount of pride, I think.  It simply has to be a genuine pleasure coming in to work each day with the ability to share so much magic with so many.

For those that know their Ardbeg, I’m sure just the age declaration is enough to get the saliva flowing.  Not only is it the most mature standard(ish) release since Airigh Nam Beist, but being 21 years old would mean this was pre-Glenmorangie distillate.  Mid-1990s, if you do the math.  Just prior to Allied shutting ‘er down, selling the farm and the new owners pouring buckets of paint, capital and love into getting it all back up and running.  In simplest terms, this is malt of another age.  A time before the boom.  I have my own theories about why whisky from this age (and earlier) was better, but that is discussion for another day, ere this post ends up in essay territory.  Suffice to say, whisky today is different from those bygone barrels.

Now…2016 and finally a new age-stated Ardbeg.  I wish I could say that the sky high price tag was unwarranted or that the hype and hyperbole surrounding this one were unjustified, but the simple fact of the matter is I’d be lying.  This is Ardbeg at the top of its game.  The peat knuckles under in favour of softer, fruitier notes.  The smoke is omnipresent, but never overwhelming.  The subtleties and nuances will have your nose dipping to the glass time and again.  And the unbelievable sweetness will likely make any Ardbeg aficionado mourn a lost age.  To be honest, I adore this dram.  I’ve drunk it on three occasions now and liked it more each time.

Allocation is small and price is high, but don’t miss your chance to try if opportunity arises.  Liquid history.

Nose:  Very Ardbeg, right off.  Orange and melon.  Maybe even a touch of tangerine.  The fruitiest Ardbeg in a loooooong time.  Almost tropical.  A faint touch of leather.  Soft vanillins.  A few minutes in the glass allows a plethora of estery notes to rise; huge sweet fruits and candies.  A slight doughiness (or glue-iness?).  Smells of soft oils and a beautiful balance of freshness and old mature malt.  Love it.

Palate:  Some smoke leads, but it tangs up with some great orange-y fruit notes almost immediately.  Citrus pith.  Lemon and lime.  Green apple.  Rubber and ash and all that Ardbeggian stuff.  Tastes of char.  And some of that pastry/dough-ness about it.  Some licorice and dry tea at the back end.

Thoughts:  Gorgeous nose.  The palate is not quite as spectacular, but still a magic dram.

3 thoughts on “Ardbeg Twenty One Review”