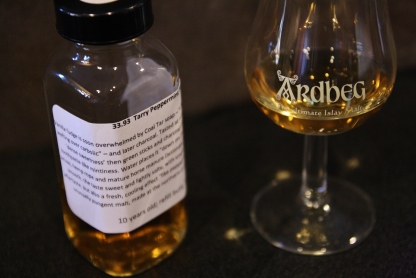 Another nifty little Ardbeg from the SMWS.  At ten years old this time, but not likely too comparable to the distillery’s flagship ‘Ten’, as this one is from a refill sherry butt that yielded up 626 bottles; not an ex-bourbon barrel.

Ardbeg SMWS releases are well-coveted nowadays.  When they do hit the market they tend to be quite young and still full of teeth.  I think the oldest I’ve yet seen hit the shores here is an 11 year old (but I should double check that before I swear to it).  What this means is that the Ardbeg we do get from the SMWS should be somewhere in the neighbourhood of the standard or limited releases the distillery puts out.  I can’t really say that’s the case though.  Only one or two of the eight or ten Ardbeg SMWS bottlings I’ve tried actually fit the distillery’s recognized profile.  Odd, in ways, but understandable when you acknowledge that a) the distillery isn’t likely to let its best casks go to anyone (despite the fact that the SMWS and Ardbeg were under the same ownership up until about a year ago) and b) every cask is a snowflake.  Additionally, as we know, the single cask path is often paved with some very wobbly stones, so any preconceptions that this would be truly ‘Ardbeggian’ may be mistaken.

As the score above should attest, though, this is a rather decent outing.  I like the singularity here, if maybe mourning the lack of true Kildalton capital ‘A’ might.  In short…I liked this one, but didn’t love it.  But Ardbeg is like pizza or sex, right?  Even when it’s bad, it’s still good.

Oh, and by the way…not so much on the tar (in my opinion), but definitely the mint.

Palate:  Big oaky notes redolent of bourbon.  Spice and eucalyptus.  A lot of smoke.  Sharp citrus.  Apple skins.  A Palate that reminds a tick of Corryvreckan, oddly enough.  With maybe drops of Oogie in there too.  Seafood on the shell.  Dry scones.  Tannic fruit skins at the back end.

Thoughts:  Quite aptly named dram.  Unique enough to keep me coming back for more, but quite jagged.  While this came from a refill butt, I would never guess sherry. I may be being a mite stingy with the marks, but it’s definitely an outlier for Ardbeg.  Cool to try though.

*A friend of mine, Kelly Carpenter, founder of the Canadian extension of the SMWS put this little sample away for me a few years back, knowing I was an Ardbeg junkie.  Just now tasting.  Thanks, Kelly.