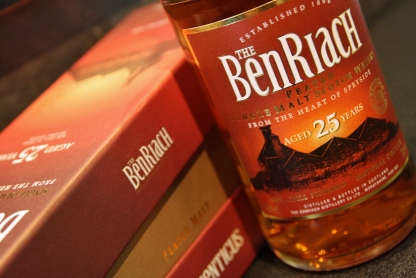 Over the next couple of days I think we’ll hit up a couple of peated Speysiders from one of my favorite distilleries: BenRiach.  We’ll start with the 25 year old Authenticus, before moving into something a little younger.  Authenticus was previously marketed as a 21 year old, which I notched at a respectable 88.5 a couple years back.  They’ve bumped the age (and the price) a bit and nixed the old expression in favour of this 25 year variant.  Trading up, it would seem.

Before getting into tasting notes, let me just say this is a helluva variant on peated whisky.  I typically tend to reach for the wee Hebridean island malts when I want my fix of bog juice, but it’s neat to see what happens to the whisky when the smoky organic influence is composed of more landlocked decay as opposed to the oceanic saltwater-doused island peat.  Less briny and medicinal, as a rule, and often more farmy and floral.

After spending ample time with both of these expressions – the 21 and 25 – I’ll unequivocally state that they’re both special whiskies.  Variations on a theme well worth exploring.  Almost like good modal jazz.  It’s the subtleties and nuance that make the malt rewarding.  Enough pretentious natter.  Notes…

Palate:  Nice, big delivery.  Slightly bittering.  Not as soft on the fruits right off, as I’d imagine, but a nice heft of bolder, darker fruit juice instead.  Smoke.  Tart candy.  Maybe cinnamon stick and just really dry wood.  A little less than I hoped for, but good.

Thoughts:  Better nose than palate, but a treat nevertheless.  Would have scored higher if the palate could live up to the olfactory promise.  Either way…delightful.