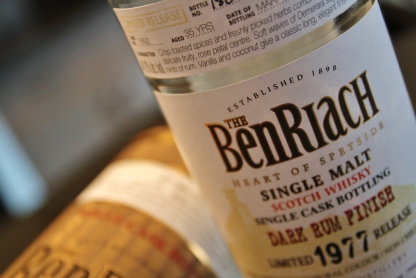 A vanity project whisky in some senses, and one I concede a personal bias to right up front.  This cask was chosen by one of my best mates, J Wheelock, for our local market here in Alberta (and beyond maybe…?).  Having made my concessions, I’ll now admit that I don’t feel the least bit guilty for scoring this one highly or touting it as a great dram.  It comes down to knowing that J has a great nose and palate, and that the malt itself lives up to all I’m looking for in the glass.  Those that know J (most of Canada) will likely concede that first point right up front too.

Alright.  Having established that, let’s dig into what makes this 35 year old BenRiach single cask release so special.

It’s not often you find whisky that has slept away a good chunk of its life in a former rum barrel.  Those few I have found that have done so have been sort of Franken-whiskies in some senses.  Not necessarily monsters, but not a real approximation of a cohesive dram either.  I went into this one expecting something similar, but with slightly more trepidation, as this is a 35 year old whisky we’re talking about.  And one from a personal favorite distillery.  Older BenRiach is stunning with simple bourbon barrel maturation, but rum?  Lowered expectations.

Happy to report that all cynicism was for naught.  This is a bloody good dram, and incredibly well integrated for such disparate spirits.  I’m not much of a rum guy, but these two flavours dance together here like long time partners, in lock step and with true grace.  The rum influence is real and it’s actually rather exciting.  Not overpowering; just bringing dark sugared notes to a sweet old malt.  As hinted at above, whiskies like this generally scare me, but this is the stuff of sweet dreams, not nightmares.  I’ve been fortunate enough to bang away at two bottles of this gem, but desperately need another to shelve for future days.

This dark rum barrel-matured BenRiach cask yielded a mere 220 bottles, so chances to grab one are very limited at this point.

Nose:  Deep, dark and complex.  Gorgeous light fruits in heavy, heavy syrup.  Marzipan.  Brown sugar.  Dusty grain and pressed flowers.  Rather spicy with a fleeting savoury note.  Toasted coconut.  Baked apple with caramelized sugars and spice.  Plenty of those ‘old whisky nuances’.  I LOVE this nose.  More and more, in fact, the longer I spend with it.

Palate:  Toasted oak top note meets dark caramel and old spices.  Strong oily vanilla notes.  A mishmash of dark fruits and dried tropical fruits.  Tastes very mature, without being over the top.  A fine balancing act that dries a little towards the back end.

Thoughts:  Softens the longer its left in the glass, and makes for a very meditative dram.