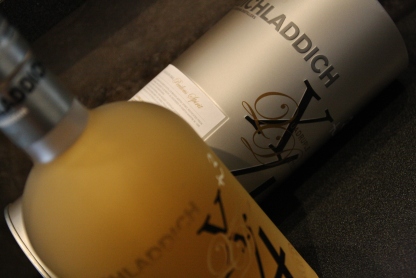 This is gonna be a hit or miss malt for many, I can imagine.  It simply does not boast a profile that falls in line with most preconceptions of Scotch whisky.  Actually, I’ll go a step or two further and say that this is one of the oddest whiskies I’ve ever tasted.

Imagine mixing young Scotch, old Canadian whisky and citrus-scented cleaning products or polish.  That’s about as close to the profile as I can articulate before we get to actual tasting notes.  For those of you out there with one eyebrow cocked in cynical questioning…relax.  Irrespective of where your mind initially takes you with the above descriptors, rest assured that this is actually a pretty decent whisky.  Albeit very young and aggressive.

X4+3 is Bruichladdich’s infamous X4 spirit (read: quadruple distilled Bruichladdich) that has napped for a brief three years (hence the ‘+3’ in its appellation) in very active barrels.  And I mean VERY active.  The flavour notes imparted by the cask are kinda like a high note held on a very tightly strung instrument.  Struck and left to resonate at an incredible pitch for a very long time.  The abv here, and Bruichladdich’s wonderful adherence to the practice of foregoing chill filtration, ensures this one will be clinging to your teeth and tastebuds for hours after sipping.

As one might expect, an incredibly pure spirit maturing in new vibrant wood means an end product that is razor sharp.  Don’t come into this one expecting a mellow, wizened old dram.  This is meant to be approached as an anomaly in the whisky world.  This is Jim McEwan being Jim McEwan and having a bit of fun in the halls of his Wonka-esque laboratory.  Having said that…it is still infinitely sippable, and very, very sweet.

From the ledger of the good people at Bruichladdich:  “In 1695 Martin Martin, a Hebridean traveller wrote of an ancient powerful spirit, which translates from the Gaelic as “perilous whisky”. he was told by the natives: “one sip and you live forever; two sips and you go blind; three sips and you expire on the spot”. Humbly, and in the typical Bruichladdich spirit of adventure, we have re-created this legendary, quadruple-distilled blockbuster dram.”

Nose:  Incredibly clean, with lots of lemon and lots of vanilla.  Some orange, and definitely grapefruit.  Even pineapple.  Big woody notes (not dissimilar to a Canadian whisky…the old Alberta Premium releases, in particular).  Vanilla ice cream and orange creamsicle.  Chocolate, both milk and white.  Lemon coconut macaroons.  Pine Sol and an almost cut-spruce freshness.  Maybe even a vague hint of mint.  Softer than imagined, though, somehow.

Thoughts:  Certainly not everyone’s cup of tea (malt), but I kinda dig this profile.