I’m delinquent in posting these write-ups.  Apologies to all involved or any who may be interested.  No excuses, just keeping busy.  With that out of the way, let’s get on to sharing the word on a recent Dram Initiative whisky club tasting here in Calgarythat took place a few weeks.

You had to know it was coming.  It was only a matter of time before we were going to break out the big guns and unleash Ardbeg on the masses.  Said masses being the faithful folk of the club, now 56 members strong, that is.

Long time readers of ATW (or even just those with a little bit of observational wherewithal after skimming a few posts) will undoubtedly know that I have an unhealthy appreciation for the phenolic phenom known as Ardbeg.  While I concede that part of me just likes corralling others into appreciating my vice, there was more than simple selfishness that lead to our club event. 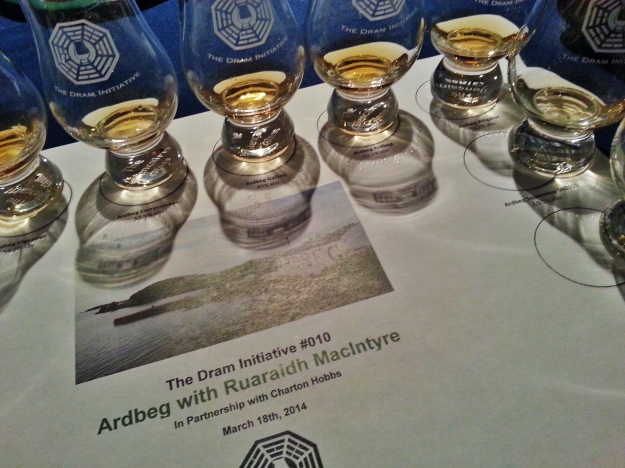 Ardbeg is a malt that needs to be a part of any whisky enthusiast’s base of knowledge.  It’s a touchstone.  It’s an extreme.  Much like anything else in life, in order to truly understand whisky you need to experience it in all it’s guises.  With whisky, I believe you need to drink it young and old, good and bad, soft and harsh, sweet and smoky.  Ardbeg represents the biggest and boldest.  This is not a malt that has ever been meant to exemplify subtlety (though in some of its older incarnations, it does exactly that).  Once you’ve had Ardbeg, nearly all else will seem relatively tame by comparison.

So, educational value aside…there was a further reason Ardbeg was always going to crop up on the menu at some point.  And that reason is Ruaraidh MacIntyre. 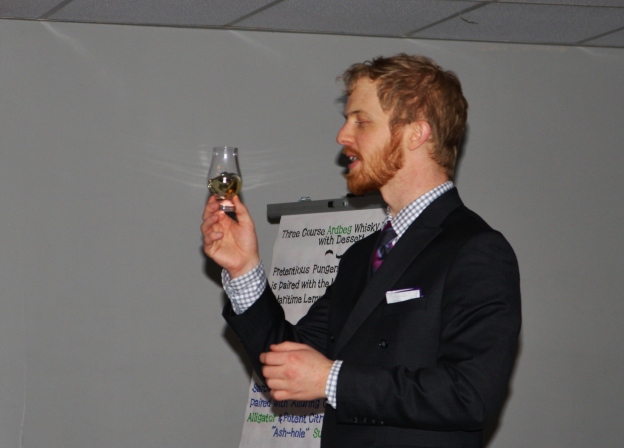 A fair while back now, I met Ruaraidh at an event Andrew Ferguson put on.  This event was a once-in-a-lifetime whisky tasting affair which culminated in the paired drams of 1974 Double Barrel.  These two ’74 sister Ardbegs were, and are, an unequicable highlight of my tasting experiences to date.  Like…’top 5 ever’ kinda highlight.  No exaggeration.

That particular night was special for a multitude of reasons.  Good food, good drinks, good people, good ambiance.  But much of the credit has to be laid at the feet of a great host for the whole affair.  That host was, of course, Ruaraidh.

Ruaraidh is a native Ileach (the appellation by which the good folk from Islay are known by).  He spent that evening regaling us with tales of Islay…stories of the people…descriptions of the sights and smells…and kept a vibrant thread of personal experience woven throughout.  The authenticity of a native Ileach was a huge part of what made the night memorable.  That’s not to discount the fact that he’s simply a damn fine speaker and snappy dresser to boot.

When the opportunity arose for us to lock down Ruaraidh for our own Dram Initiative Ardbeg event we were tickled pink, and wasted no time in cementing all of the logistics. 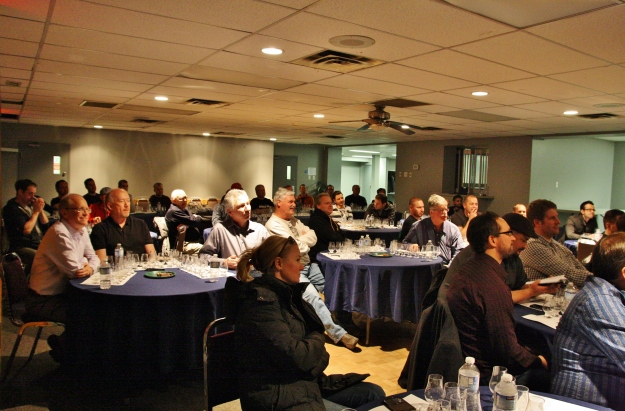 Interest was high for this club event.  (Was that a result of my incessant flag-waving, or simple curiosity on the part of the members?).  We ended up with about 60 folks in attendance for a gathering that ran us a good solid three to three and a half hours.  Laughs were plenty…and the mood was jovial throughout the night.  We broke the tasting into three sections again, in order to allow a little bit of interaction and discussion amongst the members who made it out.  During these wee breaks, Ruaraidh circulated and answered questions and such for a few of the keeners in the audience.

A great speaker and a roomful of the faithful does not necessarily make for a great tasting though.  Cue the green bottle.  We pulled a few long-gone gems off the shelves in order to make this all happen.  It became sort of a ‘who’s who’ from the past couple years of Ardbeg releases.  A few of these bottles are now sadly fetching ridiculous sums on the secondary market, but that’s neither here nor there.  It was a pleasure to be able to crack ’em open and enjoy in the company of a lot of good people.  That is what whisky is for, after all.  There are a few sounds that should forever be linked: The pop of a cork…the clinking of glasses…the laughter of friends.

Here was the evening’s ‘menu’ as we tackled it:

…and a little something extra to finish it all off… 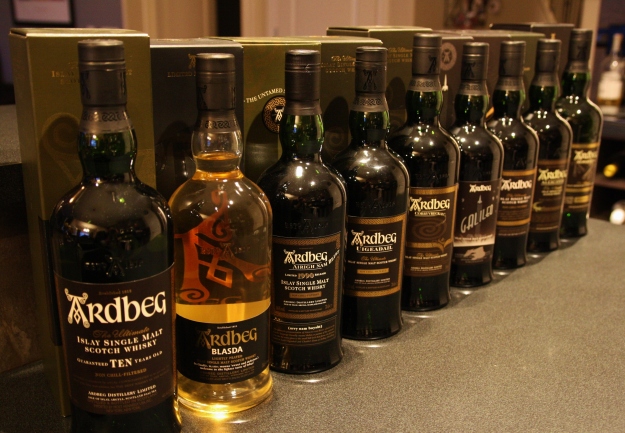 Here’s where I have to give tons of credit once more to our kind host, Ruaraidh.  We lobbed a few gentle barbs and bits of fun his way all throughout the night in an attempt to keep him on his toes.  Like the quintessential professional, he handled all with grace, self-deprecating humour and the occasional return volley.  This carried through right up until the final malt of the evening, which we poured blind and asked Ruaraidh to take a whack at.  Maybe it was a little underhanded and disingenuous on our part, but the final drink of the eve was a dram of Douglas Laing’s ‘Big Peat’, built on Ardbeg, Port Ellen, Caol Ila, Bowmore and Port Ellen.

I won’t tell you whether or not he was close in his guess as to what it was.

All in now, this was probably one of the club’s best events to date.  The bar was raised a little.  Makes it tough on we poor coordinators to try to line up an event to follow.  Such is.  Challenge accepted. 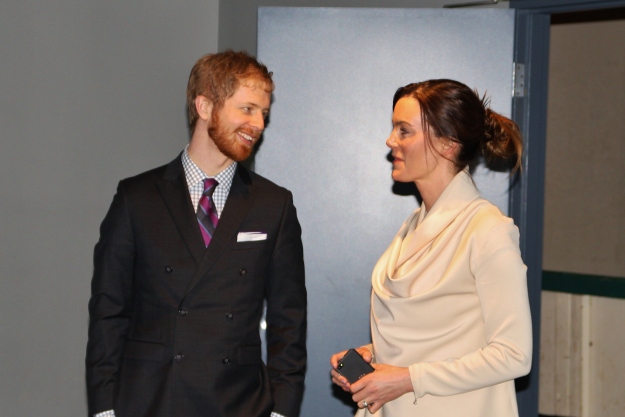 Sincere thanks again to Ruaraidh for spending a wonderful evening with us.  It was appreciated, and hopefully we can do it again soon.  Many thanks to Jordan Cameron, who once again came through on behalf of Charton Hobbs/LVMH to help us coordinate a knockout event.  And finally…thanks to Charton Hobbs themselves for their support for the second time in two months.  From us to you…we appreciate it.