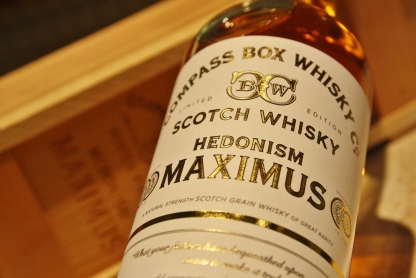 The finest grain whisky I ever tasted was a stunning 45 year old Clan Denny Girvan from 1965.  It was enjoyed over a rather magical (read: drunken) evening out with Mark Connolly and the fine folk of the Glasgow Whisky Club.  The clean crispness and utterly pristine profile of that dram were a lesson learned in just how incredible very mature grain whisky can be.

In terms of all grain whiskies I’ve tried to date, Compass Box Hedonism Maximus is second only to that one particular Girvan.  Prestigious company to keep, in my humble opinion.

Long time ATW readers may recall my waxing poetical in an old Compass Box tasting event write-up about how I was quite taken with the first editions of Compass Box Hedonism.   If so, try to imagine the personal appeal of an uber-aged variant.  Maximus is built of 42 year old Invergordon distilled in 1965, and 29 year old Cameron Bridge distilled in 1979.  (I’ve read Carsebridge, as opposed to Cameron Bridge, in a few write-ups now, but that seems unfounded, especially in light of the CB website itself mentioning the two contributing distilleries).  Age has again worked her magic on this spirit, and such a lengthy slumber has done amazing things to this blend of grains.

I concede it is highly possible many of you would score this higher than I do.  It’s important to recognize that this is not my favorite profile (being so close to a bourbon or a rye, as it is), so any score posted above will carry some bias.  At the end of the day though…it’s just a number.  Hopefully the words will help convey that this is an exceptionally composed whisky.

Ok…one final note.  This review, like many here on ATW, is not exactly timely.  By that I mean that it’s not exactly timely from a marketing perspective (’cause that’s not the point of this website).  This whisky was limited to 1,500 bottles and by now is most likely but a distant memory for most retailers.  Having said that…please do recognize the relevance of discussion on this one, and let this be something of an overt endorsement of the Compass Box brand.  Their core releases are leaps and bounds ahead of so much of what is out there on the market, while their special releases (Maximum, The Last Vatted Malt, The General, etc) are utterly brilliant.

Nose:  Such sweet vanilla and coconut.  I’d actually guess this was a bourbon, based on first nosing.  A lot of oak…a lot of spice.  Cinnamon and nutmeg over toasted marshmallow.  Distant hint of cherry lip balm…like the smell you cling to as she’s walking away.  A touch of orange, tangerine with white chocolate and faint smoke.  Frothy, creamy, buttery toffee foam.

Thoughts:  Another one of the high-end compass box releases that is unequivocally worth your hard-earned dollars.  I believe I’ve referred to CB mainman, John Glaser, as an alchemist at some point in the past.  Case in point.