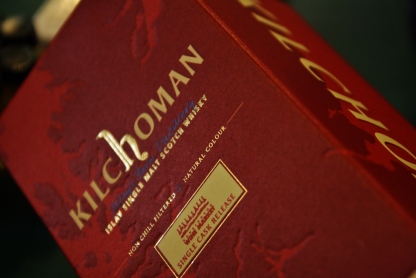 To be clear though, before going any further…you gotta be a lover of enormous billows of smoke and peat reek in your glass in order to really appreciate this one.  If that’s your cup o’ tea (or malt) however…do read on.

Kilchoman, Islay’s wee little success story is now in year 9.  Oddly enough though, having said that, we’ve yet to see any official Kilchoman releases nearing that sort of age statement.  Most of the expressions I’ve seen hit the shelves so far are still averaging about 5 years, give or take.  Case in point is this young single cask release bottled exclusively for Calgary’s Kensington Wine Market.  The spirit was born in 2008 and ‘came of age’ in 2013, when it was bottled and sent out into the great wide open (or Calgary at least).

If you’re familiar with the Kilchoman profile, don’t expect anything new here.  If you’re unfamiliar…well…I refer you back to the second sentence in this review.  This is a young and snarling Islay single malt, where the smoky and earthy notes are forefront and subtlety is nothing more than a word in the dictionary between ‘huh?’ and ‘what?’  It’s a ‘nearly naked’ whisky, coming from an ex-bourbon barrel, so there’s no hiding behind the sweetening influence of sherry or any other sort of finish.  In my ‘umble opinion this relative purity suits the clean and impressive distillate from Kilchoman.

Much like a magician drawing your eye away with one hand as he palms a card with the other, I think the enormous peat influence here helps to draw the mind away from the fact that this is merely a five year old whisky.  If this were an unpeated malt I can’t imagine we’d all be quite so enamoured.  Just my two cents.  Having said that…at the end of any magic act I’m always happy just to have seen a good show and leave satisfied.  I don’t need to pull back the curtain.

I can’t imagine any fan of Kilchoman being disappointed by this whisky.  They may however, like me, take exception to the $120 price on a five year old whisky.  I love this distillery, but there’s no need for pricing like this.  There are 18 year old bottles of Springbank on the shelf at a similar price point.  Just sayin’.

Limited run of just 252 bottles.  If you want one…grab it while you can.

Thoughts:  Another great young Kilchoman.  I’m holding back from going any higher on score, as technically this is rather flawless, but at such youth there’s still so far to go.  Can’t wait to see this distillery’s quarter century malt at some point far down the road.  So much yet to come from Kilchoman.