I went into this one already a member of the SMWS.  I also went in knowing I liked many of the expressions I had tried so far.  Further…I already had some idea as to how the event would go down.

What I didn’t anticipate going in, however, was just how much I would enjoy this evening.  Honestly.

Earlier this day, as I was preparing for the event, I said something to my wife along the lines of being ‘pretty excited’ about this one.  It’s not often I get to sit down to a flight of malts blindly, in which most (or all) are new to me.  Especially in the context of the DI, where I am always involved in pulling together line-ups for the Collective.  Sometimes it’s nice to be the puppet, and not always the puppetmaster (said with benovolent glee).

This was definitely a night with a few surprises in store.

The SMWS, for those not in the know, is the Scotch Malt Whisky Society, a private whisky club whose members get exclusive rights to buy the society’s bottles, first crack at attending society events, a killer start-up kit and, if abroad…may visit the infamous UK clubhouses (hitting The Vaults is on my whisky ‘to-do’ list).

The Society is home-based out of the UK, and boasts a tasting panel responsible for selecting and bottling single casks from 129 different single malt distilleries, nearly a dozen grain distilleries and others such as Armagnacs, rums and more.  Each release is numbered and cleverly (read: abstractly) named, but the distillery itself is never mentioned on the bottle itself.  Tack on some rather…errrr…over the top tasting notes, and…voila!  The rationale here is that the whiskies should speak for themselves, and not allow any preconceptions to cloud the judgment of the buyer.  Fair ‘nough.

A couple of years back, friends of ours, Rob and Kelly Carpenter, took the plunge and committed to launching the Canadian arm of the SMWS right here in Calgary.  After some intial hurdles were bested (procurement of rights, set-up of agency, retail outlet confirmation, etc) the society launched to a rather phenomenal public embrace.  In year two now, membership numbers simply keep growing.  All you have to do is hit up one of the First Friday tastings to see why. 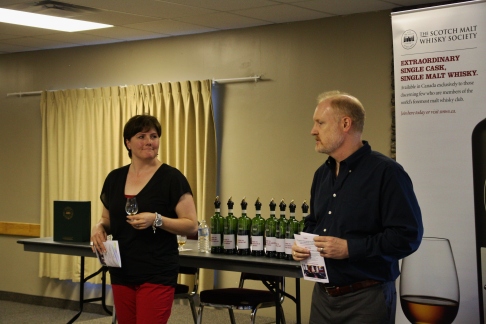 I had approached Rob and Kelly many months back about coming out and sharing a bit about the SMWS (and maybe a dram or eight of their sexy single malts).  I figured that the Society’s novel approach, utterly unique take on whisky culture and high test presentation perfectly aligned with the Dram Initiative’s ethos of independence and strength…quality and curiosity.

There’s also one other simple factor here at play which shouldn’t be overlooked.  Inside, we’re all like kids.  We like surprise and mystery.

Kelly, being the enthusiast that she is, immediately committed to an evening with the club.  We settled on a date and the rest is now (a week later) a piece of DI lore. 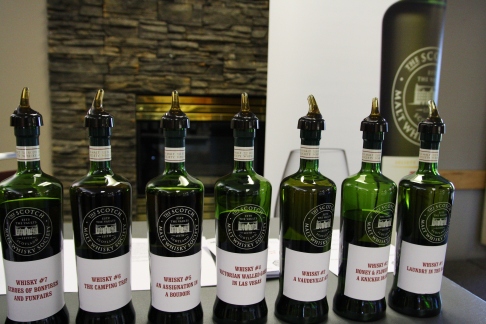 The reception to both the Society and the whiskies was much better than even I could have anticipated.   I figured we’d have a few keeners who would get right behind what the SMWS was, and I’m happy to say this was exactly the case.

The laughs throughout the evening came easily, both in relation to the names of some of the bottles and, even moreso, in relation to Rob and Kelly’s experiences and presentation itself.   Now laughs are one thing, but an appreciation and an admission to quality is another.  Interestingly enough…one member commented that it was his favorite flight of whiskies we’ve tried since the very first event.   Considering some of the malts we’ve tried to date, that is saying something.

Several left the hall speaking of joining, and i know at least one committed on the spot.  Neat stuff. 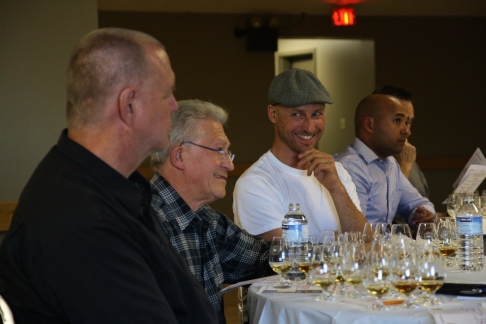 Extra special thanks to Rob and Kelly, who did an excellent job in pulling together a fun and informative tasting.  There were a couple of neat twists to the selections…some age…some youth…a variety of cask influences and some neat tales to go along with them.  I think the members really enjoyed this one.  Scratch that. I know the members enjoyed this one.

Now…what say we have a closer peek at the whiskies themselves?  In keeping with the club’s ideology, I’ll refrain from naming distilleries here.  Have a read…

Thoughts:  Very light.  Very clean.  Very drinkable.  I immediately knew the distillery, but was way off on age.  This seems older than a 12 year old whisky.

Nose:  Some paint.  Peanuts and pencil shavings.  Florals and yeasty dough.  Strawberry and creamy caramel.  A fair bit of chocolate.

Thoughts:  Very nice drink, serves up at a perfect age for this profile.  Would happily sit down to a bottle of this with mates.

Thoughts:  This one kicked a bit at first, but after a few minutes in the glass, some of those more surprising notes dissipated and left a rather sassy drink.  I know a couple of people around me names this older grain whisky as their favorite of the night.

Thoughts:  Some very interesting individual nuances that coalesced nicely.  Still not sure what a ‘designer hogshead, toasted and seasoned’ is, but hey…it works.

Nose:  Creamy.  Milky caramels and toffee.  Maybe akin to the softer Werther’s.  Freshly churned butter.  Vanilla.  Some sulphur for sure.

Thoughts:  Somewhat polarizing dram, this.  The sulphur was the dividing factor here.  A little water added took those ‘struck match’ notes down a notch, but never really got rid of ’em.  I took a little exception to this one, but I think any of the others were quite keen.

Thoughts:  Awwww, yeah!  Here we go.  A few eyes in the room lit up over this one.  Mine included.  I’m with Kelly on some of these peat and sherry sweet monsters.  Hell yeah!

Thoughts:  Sister caks to the one above.  Fun little bit of compare and contrast here.  Very different, but equally enjoyable.  These two are the kind of drams to sit down with when you have unlimited time and no interruptions.

Thoughts:  This and the first were easy ones to peg.  The others…not so much.  The youngest malt of the night was also my favorite.  There may not be sophistication here yet from Islay’s youngest distillery, but there sure as hell is quality.  Loved this one.

Thanks again, to Rob and Kelly, for coming out and spend a great evening with us.  Cheers!

For those that may be interested, see Andrew Ferguson at Kensington Wine Market, or visit the SMWS Canada site.