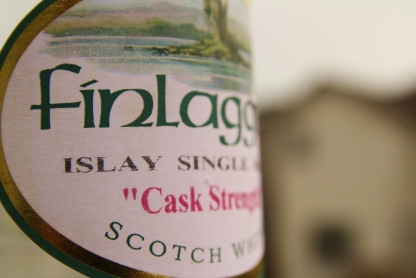 Here we have another of those non-designatory malts from Islay.  No indications are given, and certainly none are forthcoming, as to just which Islay distillery is ultimately responsible for the production of this rather tasty cask strength smoke bomb.

The most credible sources I can find seem to suggest this is Caol Ila masquerading as something other than its usual pristine delicate self.  Hmmm.  Could be.  Wasn’t my first guess, but I’ve tried enough indies and odd Caol Ila expressions to see just how chameleonic this distillery can be.  Let’s just assume, for now, that this is indeed Caol Ila.  The strongest argument in favor of this being the case is that the other three distilleries you may be more inclined to guess first  (Lagavulin, Laphroaig and Ardbeg) are running very nearly all distillate into their own expressions and can barely keep up with global demand.  I’m not sure parsing off some of their precious make into another line (guaranteed to sell less than what they already do under their own various labels) would make much sense.

Not trying to be obtuse here or anything, but these unspecified malts are rather pointless, in my humble opinion.  I’ll still drink ’em.  I’ll still like ’em.  But for the life of me I don’t get the rationale for hiding the lineage.  If you believe it is good enough to bottle and sell, you should also believe it is good enough to have your name on it.  Maybe that’s just me, so let’s move on.

This is a young-ish, and very strong, Islay single malt, taking its name from the historic seat of the Lord Of The Isles on Islay.  I’m guessing the whisky itself is maybe 7 or 8 years on.  It is bigger than big, and much better than I’d hoped for.  I really quite like this, and being as I don’t see it ’round locally anymore, sort of regretting not putting one or two aside for that preoverbial rainy day.

Palate:  Tarry and oily.  Smoky and peaty.  Anise and some strong medicinal characteristics.  Slightly nutty.  A lot of heat, not dissimilar to a Caol Ila Natural Cask Strength OB I have.  Credence to the rumours perhaps.