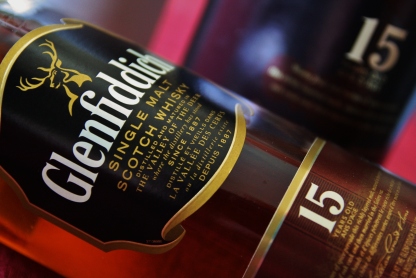 a
Don’t be put off by the name Glenfiddich. There is a reason it is the world’s leading single malt. Many malters cut their teeth on this whisky, then for whatever reason, turn their backs on its streamlined simplicity as they start branching out into the wide world of malt. If this is the case with anyone reading this, I recommend a suspension of snobbery for a brief moment or two and to give the 15 year old Solera a shot.

It is truly astounding what 3 more years in the cask and a unique vatting can do to a whisky. The Glenfiddich 15 Solera is absolutely a different beast than its younger kin.

The Solera vat in question is used to marry the casks together which constitute the 15 year old. These casks are American bourbon, Spanish sherry and new oak. The Solera ‘feed from the top, pour from the bottom’ system allows the whisky to be continually blended and ensures a high level of consistency. Not only consistency, but also to theoretically allow the end product to contain some whisky older than its years.  Nifty, but with the amount Glenfiddich produces, I can scarce believe that much of the spirit sits around long enough in the vat to actually accumulate older malt in its constitution.

It is hard to pinpoint just why this is so much better than the 12 year old. It is simply bolder, more refined and has a swagger that the 12 does not even pretend to.

Nose:  A hint of tobacco and spice. Apple, of course. A big young fruity Speyside kick, though mostly made up of a sour berry tang. This has its jagged corners rounded off with a honeyed floral character. Also some chocolate and mild-tempered sherry. None too atypical of most other rather pedestrian Speyside malt, but maybe slightly better composed.

Palate:  Rather bold.  That tart fruity tang hangs in there.  Met with apple and cinnamon spice.  Even though the body is fairly light, the finish is relatively long and surprisingly oaky.

Overall…well worth the extra few dollars over the 12 year old, and gets the extra points for a lack of seams and a rather flawless composition.