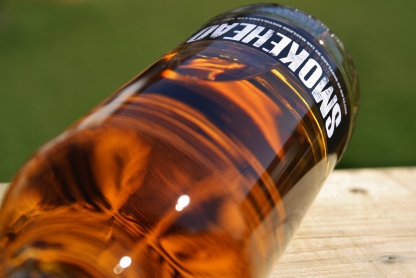 There are some interesting mutants out there in the whisky spheres right now.  Some aren’t mutants per se, but they are just far enough out of whack with the rest of the industry that they stand in a league of their own.  Some…exceptional.  Others…not so much.

These muties I speak of are often of the peat/smoke variety (though there are many others out there).  Think Big Peat, Finlaggen, Peat Monster, the Double Barrel expressions, MacLellands, and of course this… ‘Smokehead’.

The reasons these don’t quite fit the mold are as varied as the expressions themselves.  In some cases they are vattings, in which the component malts are kept secret.  In others they are single malts from unnamed distilleries.  In yet others, the exact proportions of the components are being guarded like the Caramilk secret.  Finally…a few are just…odd.

Smokehead falls into the ‘this is a single malt, but we won’t tell you which distillery it comes from’ camp.  Fun.  To a point.  Then, if you’re anything like me, that mosquito bite-like itch just won’t go away and you simply want confirmation of whether or not your surmises are correct.  Yes…Christmas was rough when I was a kid.  ‘Let’s see…can I peel back this wrapping just a bit without anyone knowing I was peeking?’

Funnily enough…for once I side with the masses.  I too believe in my heart of hearts that this is a young Ardbeg (but wouldn’t be surprised if it was Lagavulin).  There are hints of Laphroaig, Lagavulin and Caol Ila, but the overwhelming character is Ardbeg.  Young Ardbeg.  Experience suggests this one wouldn’t necessarily be out of step within that camp.

Anyway…speculation aside…this is a surprisingly decent dram.  My initial skepticism led to yet another humbling experience in the ‘don’t judge a book by its cover’ ethos.  Uber contemporary packaging and marketing (not necessarily embraced in an industry lorded over by the heavy hand of tradition) led me to initial dismissal.  Not to mention the suggestion that this should be used to create a drink called a ‘Smoke & Coke’.  I’ll say this one more time…don’t f*ck with my malts, people.  Good Scotch is not made to be mixed, contrary to what certain individuals think.  I can almost promise you 99.9% of Scotland’s distillers would happily explain how their malts were meant to be consumed.  Betcha paycheques this would not include ice or mix.

Forgive me my soapbox oration.  Back to ‘Smokehead’.

Medicinal and Band-aid like on the nose.  Powdered cocoa…dry ashy smoke and fresh squeezed grapefruit.  To be honest…nothing really unique, but it is surprisingly well-constructed.  Slightly sharp, but not unpleasantly so (you know I like my peat young).  Very pleasant nose for those that like a little Islay terroir in the glass.

The palate is dry peppery malt that develops into buttered biscuits or scones and green grapes.  That selfsame Band-aid iodine from the nose crops up again and does battle with the licorice notes.  Quite Lagavulin-esque on the palate.

Solid outing here in this NAS expression.  There is an 18 year old out there. Anyone who can get that particular nectar into my hands would sit in eternal esteem.