Mystique.  Something that is sadly lacking in far too much of our day-to-day existence.  How ‘bout some alchemy?  Astronomy?  Mythology?  Conspiracy?  Anything, really.  Just something to spice things up a bit.

A few months back, October of 2011 to be precise, saw the launch of Canada’s branch of the Scotch Malt Whisky Society, heretofore referred to as the SMWS.  While none too overtly underground or bound to incite the loonies to pull out their foil caps, the best kept secrets of the SMWS will only ever be revealed to members.  Fortunately…the ranks are still open to new folk becoming initiates. 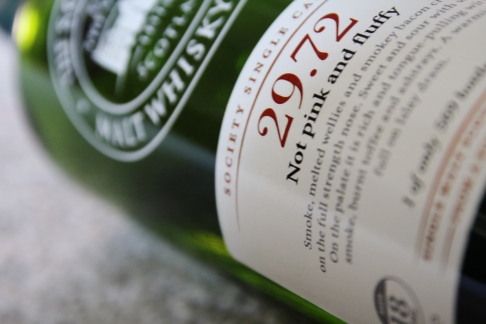 All of this is not to say that the SMWS is (or isn’t) the best independent bottler out there.  That is a conversation for another day.  Nonetheless, it is a staggering organization that seems to have (or have had) access to casks from every distillery conceivable.  If you are a malt anorak that lives and dies by the unique print each whisky boasts, there is arguably no other bottler than can provide you with the breadth that the SMWS can.

The history of this organization is not mine to share here.  This little feature serves only to spread the gospel about the Canadian branch.  Wiki is your friend, folks, but note…like all great mysteries…there may be more here than meets the eye.

And while there are no secret handshakes, no ritual initiations, no Stonecutter’s anthems, no degrees, and sadly no skull to drink from (c’mon…admit it…that would be cool!), there is still a bit of society secrecy and elitism.  SMWS bottles are only available to society members.  No degree of envy or desire will land you one of these beautiful green bottles without having the passkey (ahem…your membership number).

But further, to add an element of mystery and secrecy, each bottle is identified only by a number, a title as esoteric and ephemeral as a Tom Robbins quote and some over-the-top tasting notes.  Oh yeah…and these tasting notes will usually feature some obscure hint to lead you in the right direction if you care to play private dick and try to suss out the source distillery on your own.  The teasers are often along the lines of ‘this distillery’s cast-iron mash-tun is painted bright red’ or ‘the distillery was built in 1779’.

The two passionate (errr…eccentric) individuals you’d have to thank (or blame) are Calgary couple, Rob and Kelly Carpenter.  Watch for SMWS Pt 2 in the coming days…an interview with these two dram-swillers.  If the opportunity arises, do please put a bug in their ear about launching a Calgary SMWS clubhouse.  Rob…Kelly…your acolytes are waiting.

What rhymes with orange?  Right.  Nothing.  And what rhymes with the names of most Scottish distilleries?  Even less.  In keeping with the SMWS code of conduct I, of course, won’t tell you any of the distilleries by name, but I had full intentions of playing a little rhyming game to drop a few hints with my future tasting notes, but hey…what the hell rhymes with Auchentoshan, Allt-a-Bhainne or Cragganmore?  Seriously?

Having said this…SMWS Pt 3 will be a feature tasting with a handful of specially selected malts.  Your clues to solving this?  None.  Even I no longer recall what is in the bottles.  You’ll have a number, some tasting notes and my unsolicited opinions.  Just an opportunity to see some of the uniqueness available by the bottle.

When we’ve made our way through Pts 1, 2 and 3, if you should find yourself intrigued, pop on by Kensington Wine Market here in Calgary and have a little tete-a-tete with Andrew Ferguson.  Andrew has partnered up with Rob and Kelly as the retail front for this little venture.  I’m sure he’ll be happy to collect your hard-earned dollars, reward you with the keys to the vaults and send you off happier in the fight against sobriety.  Following the SMWS posts throughout the duration of this week, Mr. Ferguson himself with be the honored guest in another ATW interview.  Stay tuned.