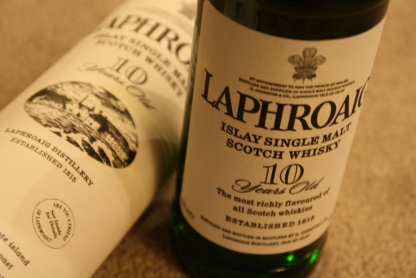 Sadly, Laphroaig 10 has all but disappeared from the local markets (ahem…Canada).  The reason for this would seemingly be the launch of the Quarter Cask expression.  So…while the 10 year old is undoubtedly a fine dram…the trade off is ultimately worthwhile.  Because we’re all friends here, come on…let’s face it…The QC is bloody brilliant.

So why would a distillery of Laphroaig’s repute not have both expressions side by side on the shelf?  Well…simple age reasons really.  The 10 year old and QC both share the same price point, but the QC matures in (about) half the time.  I’m sure you can figure it out from there.

For us peatheads, this bodes poorly though.  Our selection of Islay gold is somewhat limited as it stands, and that extra Laphroaig option would be warmly welcomed back, I figure.  Alas…we make do.

So for those who have only tried the Quarter Cask, interested in how they stack up?

Well…put simply…you’ve got the winner with the QC.  That extra 8% abv and youthful peat nip in the QC are also buffeted by much bigger smoke winds.  The 10 year old, though quite exceptional in its own right, just doesn’t have the sheer monstrosity that the Quarter Cask does.

Laphroaig 10 is nifty though.  All that you’d expect of an Islay whisky is front and center.  Peat…smoke…iodine and tar…and big briny seaside tartness.  As counter-intuitive as this may sound, it is sharper but mellower than the QC.  The sharpness comes from a citric tang, while the mellow side is simply from not hefting that extra alcohol and raw earthiness.

Don’t be fooled, peat lovers.  This is still enormous.  Mouth-coatingly oily and dense, it is chock full of smoke and seaside depth.  Close your eyes.  It’s hard not be instantly transported to dark and stormy Islay shores, where the ocean heaves massive waves against warehouses of casks, and rain falls diagonally through the night.

Breathe deep…let your lids droop…sink deep into that chair.  This is indeed weighty stuff.