In the snowy month of May, 2011 (remember, this is Canada), I was lucky enough to go back to Scotch Land with a small tour group.  I posed as a hard drinking tourist from Canada with a simple mission: drink as many free drams as offered (over 200), ascertain the total remaining casks of Port Ellen held in trust for me and return to Canada without breaking any bottles in my two suitcases.

Success comes in many forms, but always with consequence.  I was both baptized and enlightened in the lake of single malt that is Speyside, but succumbed to a bad case of liver quiver.  My suitcases proved to be liquid tight, but my Visa seemed to be somehow diminished from the constant friction of use.  The main purpose of uncovering the remaining stocks of Port Ellen was met with only modest success but came at a high cost of fallen friends.  Nothing quite prepares you for the sight of facing your comrades (No last names, Richard, Peter, Andrew and his son) in the morning following the prior day’s itinerary, starting with a morning of whisky sampling, followed by a whisky and lunch pairing, afternoon of whisky sampling, aperitif pre-dinner sharpener whisky, whisky and dinner pairing, after dinner dessert whisky and capped off by a long night of whisky bar scrambling.

Port Ellen Distillery, for the benefit of the great unwashed, was built in 1825, temporarily closed between 1929 and 1966, and then operated up to its demise in 1983.  Diageo, or UDV at the time, decided that Caol Ila was better than Port Ellen and Port Ellen was surplus to demand, so went about converting the distillery into a permanent malting facility, which it remains today.

1 – Cadenhead.  Asked on the Royal Mile and was told they have none left.

2 – Single Malt Whisky Association.  Edinburgh (yes both locations).  Was told that they have no casks .

3 – Signatory.  During the tour they were more than happy to tell us and even allowed us to take a pictures in their warehouse of their last 2 casks.

6 – Diageo (The largest drink company on the planet.  At least they can’t advertise the universe (Johnnie Rocket Whisky?)) Diageo has been very secretive and heavy handed about their stocks of Port Ellen.  Just remember, Diageo once had a street named after them, but they had to change the name because nobody crosses Diageo and lives.  There was a posting on the internet claiming to have seen the hidden treasure of remaining casks in a first person vision of 80 casks in May of 2005.  Even though the stated amounts of 80 casks in 2005 (80 casks x 250 bottles per cask is 20,000) have long been used up.  Between 2006 and 2010, 25,368 bottles have been released from their annual releases, another 220 bottles from their 2008 Feis Ile single cask along with an undisclosed amount included in their Johnnie Walker Blue Label special releases.

But here’s the rub…we all know the greatest trick that Diageo (Diablo) ever played was convincing the world that Port Ellen was in short supply.  Given that Diageo is usually short sited in most of what they do, Diageo having more casks than Douglas Laing would mean they would be smarter than Douglas Laing, which I would never concede.  So I would BBBG* their remaining inventory at 40 casks which would be approximately 9,000 to 10,000 bottles, of which I believe they will release in a declining amount over the next five years (2011 to 2015).  I would think their remaining casks to be from 1978 & 1979, which would be consistence with their other releases.

I believe they held onto 1978 & 1979 stocks as they were the oldest stock they had left that didn’t already go to blending, plus they had much invested in time and money in quality bourbon casks.  Diageo most likely sold the 1982 and 1983 stock cheaply to the independents, given the overabundance of whisky on the market at the time.  The 1980 & 1981, the missing stock years, which were just or arriving at the three year minimum legal limit for scotch whisky, were probably put into the Diageo peated blends, like JW Black & JW Blue, never to be seen again, and only appreciated if you happen to come across an older bottle from the mid to late eighties.

7 – Douglas Laing (The upstarts of independents, according to Gordon & MacPhail).  Seems to have more remaining stock of Port Ellen than Diageo and all the independents combined, and if managed carefully will last for generations (with deep pockets) to come.  This foresight of buying so many casks of Port Ellen, I believe, can be attributed to Fred Douglas Laing Senior and his love for Port Ellen, although at the time of purchase it was most likely to be a smoky component to one of their blends and not a single malt.

Port Ellen is a jewel in the crown of the Douglas Laing inventory, and Old Malt Cask at 50 % ABV in a Sherry cask is a personal favorite of mine.  On the third floor of Douglas House on Lynedoch Crescent we had the good fortune of trying numerous samples of Port Ellen (along with other single malts), in hopes of bringing yet another cask to Calgary.  Our host for the visit was Lorraine and when I popped the question (how many casks are in the Douglas Laing inventory?), the response was “ee…er…ee…er…ee…”, which I interpreted from Scottish to Canadian as, “if I told you, I’ve have to kill you, eh, you hoser”.

Douglas Laing and sister companies et al., have been releasing Port Ellen in most of their ranges, from Old & Rare Platinum (dump the burnt pine wood boxes with the bad glue jobs), Old Malt Cask (please no more low neck bottles), Provenance, Douglas of Drumlanrig, Premier Barrel ceramic decanter (please put better cork / caps in these bottles and pack them better), Old Malt Cask Advance samples and let’s not forget Big Peat, with a small shovelful of Port Ellen per bottle in a blend of scotch malts.  I would BBBG* their remaining stock to 81 casks, which is double Diageo plus one.  I would think most of their remaining stock to be from 1982 & 1983, but they would also have some older stock in reserve for their Platinum line.

In summary I BBBG* the total remaining inventory of casks (not current bottles on the shelf) and PLEASE CORRECT ME IF I’M WRONG, to be 147 casks, or approximately 40,000 bottles, given some of the remaining casks from Douglas Laing are probably larger Sherry Butts.

To honor this forever lost distillery (more of an excuse to drink), I sat down with Curt, Jay and Pat of All Things Whisky and we enjoyed five different bottlings of Port Ellen.  Curt and I decided to post our tasting notes together on this venture.

NOSE:  Citrus bites first.  Peat and smoke, wood smoke (not quite as bold as a mesquite or hickory, but very pronounced nevertheless).  Herbal.  Grassy.  Soft vanilla.

THOUGHTS:  Palate doesn’t quite deliver what the nose hints at.  Thin in terms of flavor and mouth feel.  Still a great drink, but heartbreaking it saw so much water added.  Fourth favorite of the night.

NOSE:  Bud-lite smoke.  Farmy.  Lemons and a hint of orange.

TASTE:  Sweet and salty are battling it out on the taste buds.  Grapefruit rules.

ASSESSMENT:  No need to add water to a drowning drink.  Port Ellen needs to be at a higher ABV to work well.  Fourth favorite of the night.

THOUGHTS:  Best nose of the night.  This is exactly what I think of when I think PE.  Love it.  Best PE of the night, hands down.

ASSESSMENT:  Not just any Port in a storm of independents, what I would describe as typical and predictable Port Ellen style.  Second favorite of the night (sucker for balanced sherry).

THOUGHTS:  WTF?!  Palate is much better than the nose.  Nose is almost off-putting.  Does get a little more relaxed with time to open.  Unrecognizable to me as a PE.  Hard to dissect with the rubbery notes from the rum running interference.  Least favorite of the night.

NOSE:  Wet cardboard and fishy chum delight.  This is where the rubber hits the road.  Floral.  Aarrrrrr!  This is sickly sweet.  Might improve mixing (drowning) with coke.

TASTE:  Much better than the nose.  Citrus, kiwi and burnt butter.

ASSESSMENT:  Pirate Jack & Parrot Pete can’t save the nose on this malt.  Will send the remnants of this bottle to Edmonton for recycling.  It’s said that they are a dirty people and will drink anything. 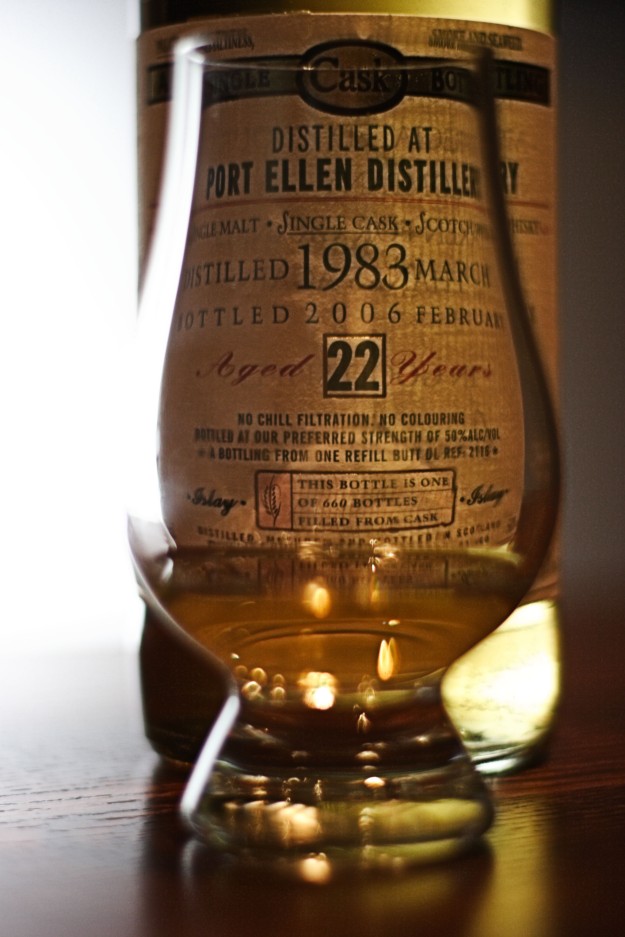 THOUGHTS:  Third favorite of the night.  Great dram and quite PE-ish with a slight malty twist.

TASTE:  Sweet at first getting bitter at the end.  Milk chocolate.  Bit minty and blackberry jam.

ASSESSMENT:  Good example of a sherry butt PE from DL.  Third favorite of the night. 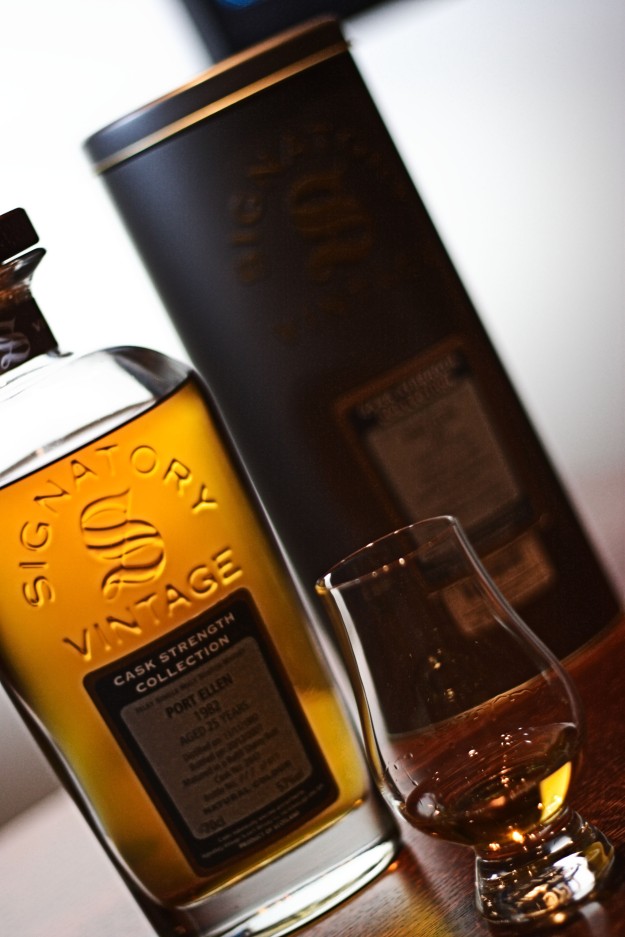 THOUGHTS:  Great balance.  Points for best arrival of the night.  Nice mix of peat and sherry.  Second favorite of the night.

ASSESSMENT:  Smoke on the water, fire in the sky, this is my favorite of the night.  Perfect balance of Sherry and Islay malt.

Although I don’t generally cry when I drink single malts unless I’ve accidently spilled some, I always seem to tear up when I’m drinking Port Ellen, and pause to remember this poem from Lord Byron:

So we’ll go no more a-roving

So late into the night,

Though the heart still be as loving,

And the moon still be as bright.

For the sword outwears its sheath,

And the soul outwears the breast,

And the heart must pause to breathe,

And love itself have rest.

Though the night was made for loving,

And the day returns too soon,

Yet we’ll go no more a-roving

By the light of the moon.