I quite fell in love with Valinch when it landed here.  The 2011 edition, that is.  It sold out before I managed to scoop a couple for future sipping sessions, but such is.  These aren’t the sort of whiskies I generally squirrel away for any other reason than value and price point.  Let’s face it…there’s always something new coming, as a mate of mine says.  I did pick up the 2012 when it arrived, but found it…well…less exciting than its predecessor.  Still quite a good dram, but it didn’t light my fire in the same way.

A few weeks back a mate of mine came by with a heel of the 2011.  Lo and behold I still had a heel of the 2012.  Neither were opened in the year of release, so rest assured these bottles are not on life support.  Both have been open for a fair while, however, but I’m happy to report that they are still lively and bright.  Perfect opportunity for the H2H I’ve wanted to do for quite some time.  So let’s do it.

Right off…the 2011 is lighter in color than the 2012.  While color means less than nothing in this reviewer’s eyes, it does speak to batch variation.  In and of itself, no bad thing, so long as the quality stays uniformly high.  The ’12 has a richer golden hue.  The latter is just a hair shy in terms of abv.

Initial nosing…hmm…fairly consistent across, but the ’11 is definitely softer.  Let’s dive in a little deeper. 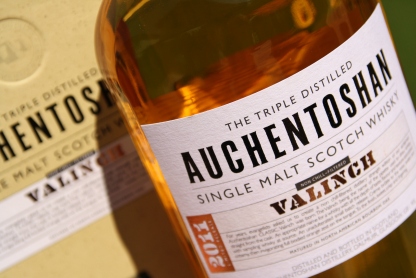 Great wide appeal, I imagine.  Fruity, sweet and infinitely approachable.  May not be overly complex, but in a case like this – where everything is clean and rich – there’s no need to overcomplicate things.

Pretty sure this is exactly what I recall from a couple years back.  And yes…I did go through my old tasting notes.  a few new ones here, but mostly the same.

Nose:  Yep.  As expected.  Soft vanillas and rich orange notes.  Zest and all.  Some tangerine or tangelo.  Soft oak notes.  Seems like lively bourbon barrels.  Maybe even some first fill or virgin oak in there?  Notes of almond and toasted marshmallow.  Maybe even some very sweet, soft chocolate.  Some fairly substantial spice notes that hint at just how active those American Oak barrels were.

Thoughts:  Sticking with initial assessments.  This is like a creamsicle.  Originally scored an 88.  No need to change it up. 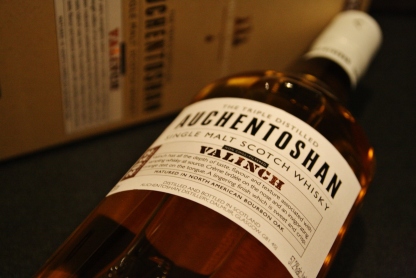 Hmmm.  The balance so effortlessly achieved in the 2011 is sadly MIA here.  Still decent enough, but the palate can’t deliver what the nose hints at.  Definitely not in the same league as the first edition.

Nose:  Orange and vanilla.  But sharper on the zest, and a little less on the sweet, pulp notes.  Some chocolate, both white and milk.  Definitely more chocolate than on the 2011 edition.  Some syrupy fruits, bordering on jammy.  Softer than expected, considering the wallop the palate delivers.

Thoughts:  I like the nose more than palate, but even the palate is decent.  Seems younger than the previous batch though.  Kinda reinforces the fears we have about both NAS and slippage.

As promised, though a day or three late (what else is new, right?), a few thoughts on the new KWM exclusives.  These siblings came from the warehouses of the good folks at BBR.  I don’t know the whole story – and hopefully you’ll forgive my lack of homework here – but I have come to understand that Andrew Ferguson at Kensington Wine Market was offered up these undisclosed blended beauts as part of a sample set that included mostly single malts.  These ones jumped out as something special.  The 40 year old, in particular.

The beauty of mature blends like this is that they often bear most of the hallmarks of good malts, and they usually come in at a substantially more approachable price point.  Proof’s in the puddin’ though, aye?  So let’s dig in. 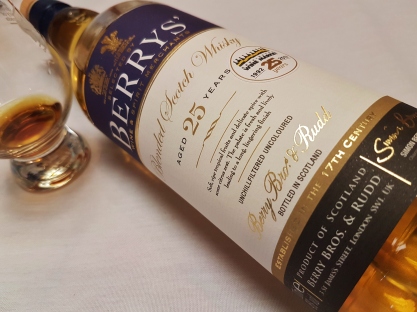 I sampled this in the store a few weeks back and was immediately charmed by the nose.  Soft and hinting at some sort of tropical melange.  Never quite gets there, but suggests it.  Perhaps it’s just the subtle pineapple notes.  Sitting down with it in a more controlled environment I’m a little less enamoured, but still impressed.  The wood is loud, but when it settles, the subtleties that prop it up are quite lovely.

Palate:  A lot of oak.  Fairly creamy though as the wood fades.  Then a berry-driven tartness crops up.  And a bucket of spices.  Then the wood resurfaces.  There’s a fruitiness here, but it’s almost as if the fruits have been baked into something.

Thoughts:  I recall liking the nose an awful lot when I first tried it.  Less wowing now, but still good stuff.  Noses like a single malt.  Give it time in the glass. 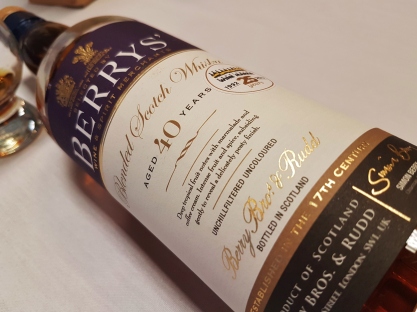 Holy hell.  What have we here?  This is immaculate.  We’ve not only nudged into tropical territory we’re drinking mango smoothies on white sands on a tiny little atoll in the Caribbean.  Yum.

The nose is instantly a mouthwatering, knee-buckling showstopper.  As good as I recall it being on first tasting, it came nowhere near the heights I’m seeing now.  Much more texture and integration here.  Noses and tastes like a wizened old single malt.  Love it.

Thoughts:  Great whisky.  All around.  I would not guess this was a blend. 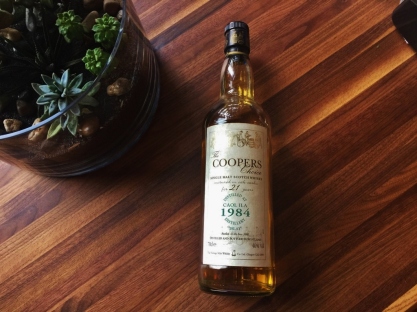 A few weeks back, at a whisky club meeting in the community hall we frequently douse in fine and rare Scotch whisky, a good mate of mine, Joey, brought me a little flask.  I don’t recall his exact words (even though this was at the beginning of the night, before the madness ensued), but he said it was a Caol Ila.

I took it home, poured it into a glass sample bottle and left it on the shelf until it caught my eye again about a week and a half ago.  I paired it up with a couple other Caol Ila samples (’cause that’s the way I try to taste these things) and sat down with pen in hand.

Now…to be fair to this one, I did try it against a couple of 30+ year old expressions.  It came across more feisty and more lively, but maybe a little more shallow in terms of complexity.  To be expected and, if you know me, not at all outside my preference.  I like peated malts with personality.  That’s not to suggest this was a young’un.  Even blind (knowing only that it was Caol Ila) I could tell there was some age on it.  21 years, I found out later, and from a 2006 vintage.

All in all, this was textbook Islay, if not immediately recognizable as Caol Ila.  A lot of brilliant flashes of flavor and aroma with just the slightest off note.  Sulphur?  Maybe.  Tough to tell, but something threw this one off just a tick.  Still a rock solid malt.

Palate:  Liorice.  Grilled lemon.  A fair heft of oak and smoke.  Pastry.  Oily again, and actually a little drying. Long and smoky finish with some grass at the back.

Thoughts:  Vibrant.  Lively.  Hints at some sulphur, but I’m on the fence as to whether or not I’m imagining it.

* Thanks, Joey.  Fun one to try.  Love tasting blind like this.

A few mates have passed on some wee samples over the past couple of months.  I’ve been delinquent in addressing this, so let’s get down to it.

You guys (and gals) know me.  I don’t take free stuff.  Not my style.  And by ‘free stuff’ I mean the kind of commercially ‘gifted’ packages that would come from the brands hoping for reviews or whatever.  In the earliest days I debated it, certain I could maintain my independence and lack of bias, but even then I questioned whether or not others would believe me as I spouted opinions from this tiny bastion of non-conformity.  Ultimately integrity was much more important than scoring freebies, so I just said ‘no thanks’.  I try to be kind when contacted, usually just informing the solicitor that they wouldn’t be able to get it into Canada anyway, but the reality is…I just don’t want to tarnish the relationship we’ve built here.

I do, however, benefit from friends passing tiny vials my way from time to time.  They have nothing to gain, just want to share and are curious about my opinion on some of these drinks.  I’ve written up some of them here on the site.  Usually these posts are accompanied by a pic of the sample bottle labeled in their own handwriting.  Sometimes I’ll ask them for a bottle shot to use, in the event they still have the full packaging.  I am currently sitting on a handful of these samples that I really should pay attention to.  They’re expensive whiskies (I imagine), and will be fun to taste.  More than that, though, it seems only right to the good folks who have shared.

The only exception that may seem compromised is that I do occasionally get samples (about an ounce, maybe less) from a couple local retailers.  These are friends trying to get the word out on exclusives and such.  I’ve always said I would help my friends and our local scene.  Here’s the deal:  If the product is shit, I probably just won’t review it.  If it’s good, I’ll review it and you can trust that I actually liked it.  Either way…the quantity is usually single cask kind of small.  Its really only the locals that benefit from these reviews.

Anyway…just wanted us to be clear.  After all…transparency is key, no matter what the big guys would prefer.

So…heads up.  I’ll be posting a bunch of these ‘vial reviews’ in the coming days.  I’ll credit those that allow me to (though some prefer relative anonymity).